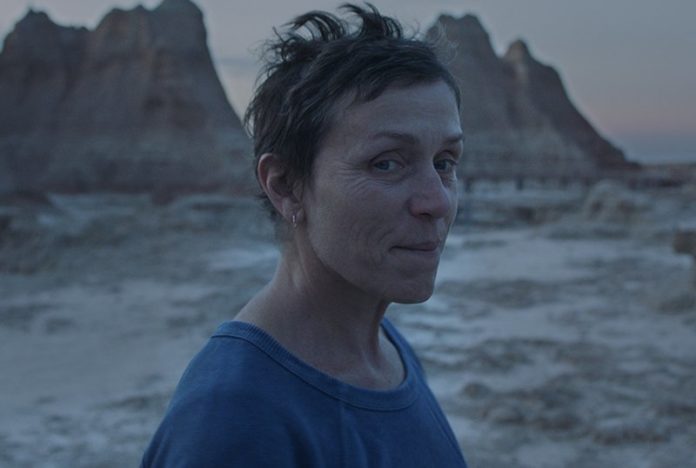 Based on Jessica Bruder’s 2017 non-fiction book of the same name, the story centers on Fern (McDormand), a woman who, after the economic collapse of a company town in rural Nevada, packs her van and sets off on the road exploring a life outside of conventional society as a modern-day nomad.

Alongside McDormand, the film will feature appearances from real nomads Linda May, Swankie and Bob Wells as Fern’s mentors and comrades in her exploration through the vast landscape of the American West, while also co-starring Oscar nominee David Strathairn (Nightmare Alley).

“The American road fascinates me,” Zhao said in a statement. “It’s heartbreakingly beautiful and deeply complicated. I’ve traveled it for many years and always hoped to capture a glimpse of it. I’m thankful to be able to make Nomadland and excited for audiences to join Fern on her adventure.”

The film will make its world premiere with simultaneous screenings on September 11 at the 77th Venice International Film Festival and the 45th Toronto International Film Festival, both of which will feature virtual introductions by producer, writer, editor and director Zhao and producer/star McDormand. With Telluride having cancelled its 47th edition due to the global pandemic, it will host a special “Telluride from Los Angeles” drive-in screening later that evening with in-person appearances from the duo.

RELATED: Tenet Opening Overseas One Week Ahead of US Release

“It is both a great pleasure and honor to be part of Chloé Zhao’s new film’s unveiling to the world,” Venice International Film Festival Director Alberto Barbera said in a statement. “Nomadland is a brave and touching journey into a world that exists under the radar of mainstream social consciousness. It is a film that acquires particular meaning in a moment of pandemic induced seclusion, proving that values like mutual support and a strong sense of community can save us from solitude, failure, and despair. I am also happy to share the opportunity to support this beautiful film with our fellow festivals of Telluride, Toronto, and New York: a concrete sign of solidarity and collaboration in this unprecedented and difficult time.”

McDormand produces the film alongside Peter Spears (Call Me By Your Name), Mollye Asher (The Rider), Dan Janvey (Beasts of the Southern Wild) and Zhao (The Rider), who adapted the screenplay and has edited the film herself.

“Chloe’s understanding and depiction of the layered beauty of the human experience achieves new heights in Nomadland,” Telluride Film Festival executive director Julie Huntsinger said in a statement. “Tom Luddy and I believe in her vision and are grateful to unite with our colleagues in Toronto, Venice, and New York to highlight this sensitive and stunning achievement.”