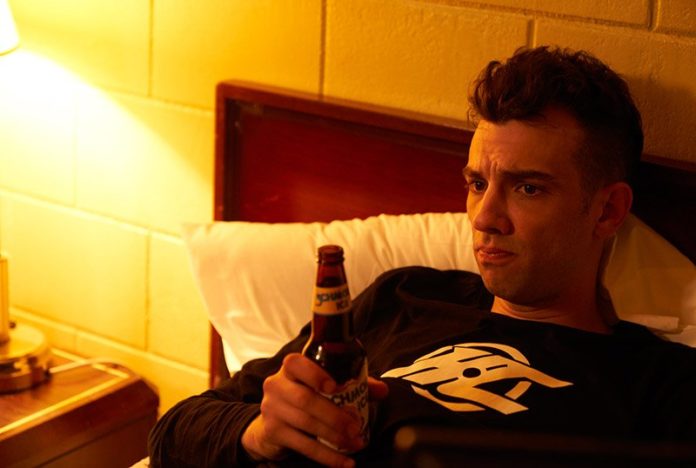 AMC’s horror-tinged streaming service Shudder has unveiled its movie and TV highlights for the month of August, including the upcoming slasher horror Random Acts of Violence from co-writer/director/star Jay Baruchel and a new Last Drive-In special episode! Check out the full calendar for what to watch on Shudder next month!

RELATED: Shudder Orders Season 3 Scripts of Creepshow, No Renewal Yet

Six friends hire a medium to hold a séance over Zoom during lockdown but get far more than they bargain for as things quickly go wrong. Host was shot remotely during quarantine and features practical scares, stunts, and surprises, all filmed by the actors in their own homes. Director Rob Savage (Dawn of the Deaf) never set foot in the same room as his actors at any point during production and instead directed them remotely. Starring: Haley Bishop (Deep State), Radina Drandova (Dawn of the Deaf), Edward Linard (The Rebels), Jemma Moore (Doom: Annihilation), Caroline Ward (Stalling It) and Emma Louise Webb (The Crown).

Indignant retired general Enrique finally faces trial for the genocidal massacre of thousands of Mayans decades ago. As a horde of angry protestors threatens to invade their opulent home, the women of the house—his haughty wife, conflicted daughter, and precocious granddaughter—weigh their responsibility to shield the erratic, senile Enrique against the devastating truths being publicly revealed and the increasing sense that a wrathful supernatural force is targeting them for his crimes. Meanwhile, much of the family’s domestic staff flees, leaving only loyal housekeeper Valeriana until a mysterious young Indigenous maid arrives. Starring María Mercedes Coroy, Margarita Kénefic, Sabrina de la Hoz and Julio Díaz. Directed by Jaryo Bustamante.

Stan and his best friend Dommer have put up with bullies their entire lives. All of that changes when Stan discovers he has a ravenous vampire living in his shed. Seeing the bloodshed and destruction the monster is capable of, Stan knows he has to find a way to destroy it. But Dommer has a much more sinister plan in mind. Starring Jay Jay Warren, Cody Kostro, Sofia Happonen, Frank Whaley and Timothy Bottoms. Directed by Frank Sabatella.

Fire up the popcorn and slip into your PJs: Joe Bob Briggs, America’s foremost drive-in movie critic, is back for a special summer sleepover double-feature. Joining Joe Bob and Darcy in the trailer park will be director Adam Green (Frozen, Hatchet series) along with other surprise guests.

In the film that kicked off the franchise as well as a Western surge in interest in so-called J-horror, a group of teenage friends are found dead, their faces twisted in terror, supposed victims of an urban legend about a cursed videotape. One year after the success of his horror classic, director Hideo Nakata returned to the world of viral video to deliver his own follow-up. And in the prequel Ring 0, a journalist tracks a young woman who uses her supernatural powers to kill members of an acting troupe.

A zoo veterinarian is caught up in a grisly adventure as she leads the hunt for a monstrous lion terrorizing Amsterdam. Starring Sophie van Winden, Abbey Hoes, Mark Frost, Julian Looman

A psychologist and his wife turn a house of the devil into a drug-rehabilitation center. Starring Richard Crenna, Joanna Pettet, Andrew Prine

Christie has been having terrifying nightmares ever since her father drowned, causing her to re-evaluate the circumstances surrounding his death. Starring Mary Beth McDonough, David Wysocki, Bill Paxton, Lynda Day George, Christopher George

As part of an initiation into a club called The Sisters, a young girl must spend the night in a mausoleum. Starring Meg Tilly, Melissa Newman, Robin Evans, Leslie Speights, Donald Hotton