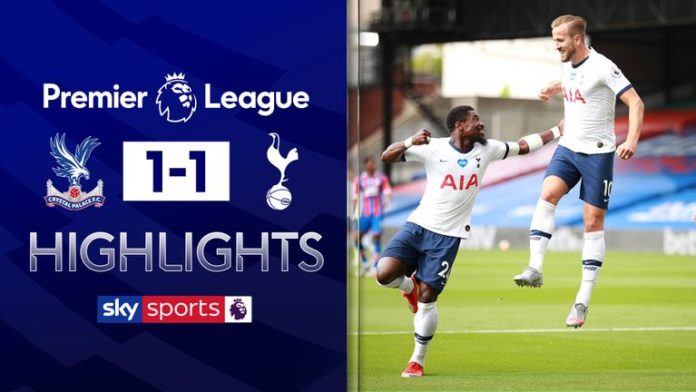 Merson says Tottenham will have a fight on their hands to keep the striker, and believes Kane would be a better option than the “hot and cold” Anthony Martial.

As far as Chelsea goes, Merson feels Frank Lampard needs to invest in a centre-back and left-back this summer, and pinpointed Manchester City’s John Stones as a potential signing, while Merse also feels City themselves may struggle to find a world class centre-half to improve their own defence.

Spurs have to keep Harry Kane. They’ve built a new stadium and can’t get any fans in there at the moment – that will have hit Tottenham hard, I don’t care what anybody says. All the revenue they’ve lost, not just from their fans, but no NFL games, no concerts, no nothing. Mourinho knows that if he doesn’t bring players in as well, they’re not going to improve and challenge. Mourinho isn’t there to challenge for the top four, he’s there to win something.

I think Manchester United need a centre-forward. I really do. And if they put in a massive bid for Harry Kane, they become massive players next season in the Premier League.

People say Anthony Martial has done great, and he has done well, and Mason Greenwood will be a superstar, but if you can get Kane playing down the middle, with Martial, Greenwood and Rashford rotating, Kane is getting you 20 goals in a bad season!

Martial is a hot player; when he is hot, he is brilliant. But you don’t win the league on hot and cold. You win the league on consistency, and Harry Kane brings you that, he’s the best striker in the Premier League. He can score out of nothing when things aren’t going well, and United need a natural goalscorer.

There will also be games where United need someone to hold the ball up. They won’t dominate every game with free-flowing football, and sometimes when that ball goes up it has to stick.

If United buy Harry Kane and a centre-half partner for Harry Maguire, they will be massive players next year. You’ve got to remember that next season is a quick turnaround, and it’s all about starting well. If you win the first five or six Premier League games, you’re in the title race. Teams could be out of it very quickly next season. City will improve, Chelsea are improving, United will improve. We saw it with Liverpool this season, City slipped up a couple times and it was over by November!

People talk about the goalkeeper being a priority. Kepa Arrizabalaga is not saving them any points at the moment, that’s a problem, but they have a really good second goalkeeper in Willy Caballero, and I think he is really underrated. In this day and age, if we’re talking about Jan Oblak, he’s going to cost £100m. Kepa himself cost £71m, and has big wages too.

I’m not sure about this one, as it wouldn’t be my major priority for the summer for Chelsea. Do they sign another £100m on a goalkeeper, where you’ve already got a goalkeeper you’ve spent £71m on, on big money, and you’re not going to get that money back? It becomes a £150m goalkeeper in the end, because you’d need to swallow the pill on Kepa. For me it’s not their major priority.

Their priority has to be getting a centre-half and a left-back. 100 per cent. It tells you everything that they have to play three at the back, Frank Lampard doesn’t trust the centre-backs. They’ve bought well so far up front, Timo Werner and Hakim Ziyech are major signings, but don’t end up like Arsenal, where everyone is crying out and can see what they need. How many years did we say Arsene Wenger needs a centre-half, but he never went and got one?

Marcos Alonso for me needs replacing; he gets vital goals but he’s not a natural defender. That doesn’t help the back three because centre-halves have to come out of their comfort zone and come out of the line of the box to defend on the wings. Alonso causes that problem.

Cesar Azpilicueta is a great pro, but he’s getting on now. Kurt Zouma has a mistake in him. Chelsea don’t have a naturally-gifted centre-half who can put his foot on the ball and play. I’d go and get John Stones for that, and play him in the middle of the three. Then I’d say have Antonio Rudiger and Christensen either side of them. Chelsea love to play out the back, they roll it out every time, so you need someone unbelievably good on the ball. If you have pace around them, I think it will help Chelsea; I think Stones would be a great buy, and he has to play in a three.

Stones has the potential to be great, he really has, but he needs the confidence. At the moment Chelsea have three centre-halves that aren’t in the same class as Stones on the ball.

‘Liverpool must kick on’

I think Liverpool need to buy, but it’s hard to know exactly where. Spurs had a similar situation under Pochettino a couple years ago; they had such a good XI, that anyone they bought wasn’t likely to play much. You can’t live like that, you have to keep competition and keep rotation.

I found that with Spurs, they never really took a chance, and it has come back to bite them.

‘Centre-halves hard to find for City’

City need to buy defenders, and it’s potentially more than one. Stones will leave because he doesn’t play, but what centre-halves are around for City?

These young players coming through at 21, 22, 23, when they were 10 or 11 they were watching Messi and Ronaldo, nobody wanted to be a centre-half! How many top, top centre-halves are there around the world at the moment? There’s a shortage around the world now, so it’s difficult, and if you’re a decent centre-half you’re going for £60m at least.