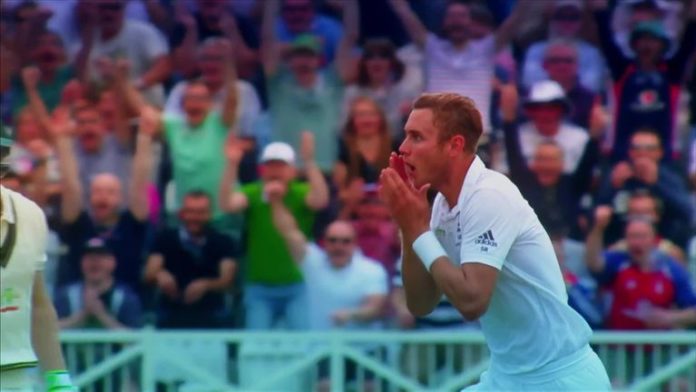 Nasser Hussain: “It was only a matter of time, he’s such a star performer”

Stuart Broad became just the second Englishman to take 500 Test wickets when he dismissed the West Indies’ Kraigg Brathwaite on the fifth morning of the third #raisethebat Test at Emirates Old Trafford.

The England seamer joins an exclusive club of only seven bowlers – including Shane Warne, Glenn McGrath and James Anderson – to reach the milestone and added No 501 to wrap up a series victory for Joe Root’s side in Manchester.

The tributes have been pouring in from across the cricketing world for Broad, here is what our pundits had to say…

“It was only a matter of time, he’s such a star performer. 140 matches says something about his fitness, his longevity. With some of these guys you only see what you see on TV but it is actually the work that is done away from the camera that makes them the cricketers that they are. You don’t play 140 Test matches unless you’ve been in the gym, working hard, working on your fitness.

“It was well documented that he lost his wrist position trying to bowl those leg-cutters and then suddenly he’ll put some footage out of him in the nets on a dark winter’s morning at Trent Bridge, working to get his wrist behind the ball. His willpower to do well and succeed, he’s a competitor.

“When you go into the battle of a Test match, he’s always been there as a competitor. The Australians don’t like him and that’s the reason for it, he is in your face and you’d better be up for a battle with Stuart Broad because he’ll always be at you, whether it is the first ball or the last ball. And it is a good combination with Anderson.

“Jimmy spoke about it this morning that he doesn’t have that spell in him but he is very consistent and Stuart Broad has those magical spells where he will just run through a side – and that is a dangerous combination, Broad and Anderson.

“He is the sort of bloke that when you do something like that to him, he will not sulk, he will come back and say ‘I told you so, you should have picked me and not only am I going to say that, I am going to go out there and make you look silly for not picking me.’ That makes him an even better cricketer, in my opinion. It’s not what happens to you that is important, it is how you react to that. He reacted verbally but he’s also reacted brilliantly with the ball.

“That is the other thing about him, he’s got a lot of knowledge. We’ve had him in the Sky box a few times and you listen to him talk about seam position, wobble-seam and plans – it is not just luck that he does what he does, he knows exactly what he is doing.

“To be able to pass that on, not just to opposition players but Jimmy said on interview this morning, ‘I’m learning from Stuart.’ So if he’s learning from him, imagine Jofra (Archer), imagine all the young talent they’ve had around because of the bio-secure environment, they’ve had 15, 20 or 30 cricketers.

“If they haven’t picked Stuart Broad’s brain then they are absolutely mad because he is not going to be around forever. Not only can he bowl but he knows how to bowl and the skills of bowling as well.”

“It’s a great achievement, 140 Test matches is not easy for a fast bowler and he still has a few years left in him. It’s not a matter of him coming to the end of his career, not as far as his age is concerned anyway, and for him to have played that many Test matches and still be as motivated as he is, still be as skilful as he is, still be able to adjust his game from one period to another, that just shows how good a bowler he is.

“If you stand still people will just walk past you and eventually you are out of the team. That is something that all cricketers have got to do, they can’t be satisfied with what they are doing, they always have to be thinking ‘can I do a little bit better?’

“What a day for him. He has been such a great performer.

“Sometimes he has been in the shadow of Jimmy Anderson, and wrongly so because, when you look at his stats, they’re as good as any England bowler.

“I think he’s been outstanding in these last two Test matches. He talked earlier about a couple of slight technical adjustments he’s made, getting his wrist behind the ball a little bit more, making him so threatening to both right-handers and left-handers.

“A great day for him, 500 wickets and a fitting end [taking the final wicket] as well.

“You think of Richard Hadlee, Malcolm Marshall, Ian Botham, Waqar Younis, Wasim Akram, all of those guys left in Stuart Broad’s shadows. That gives you some context to the quality of his performances – and also the longevity of his career as well.”

Watch day one of the first Test between England and Pakistan live on Sky Sports Cricket from 10.30am on Wednesday, August 5.

England’s while-ball side return to ODI action on Thursday, with the first of three matches against Ireland live on Sky Sports Cricket from 1.30pm.

Corn seed distribution in Central Philippines – another step towards recovery...

Backyard poultry in Syria for an enhanced access to nutrient–rich foods...