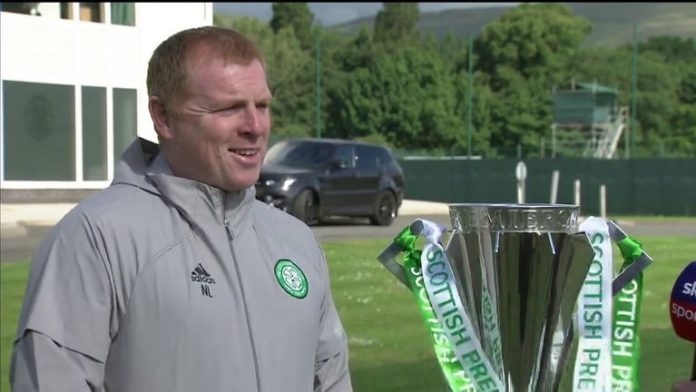 Sky Sports is only broadcaster to offer live coverage of Scottish Premiership, with up to 48 games, starting on August 1

Sky Sports’ Andy Walker offers his predictions ahead of the first weekend of the 2020/21 Scottish Premiership football season.

After a long and painful wait, Scottish football returns on Saturday at Pittodrie when Steven Gerrard takes his team to one of the most difficult away venues in the Premiership.

Aberdeen have been very prudent in this difficult time and have chosen to operate a one-in, one-out system for their squad.

Players and staff have had wage cuts imposed upon them and new signing Johnny Hayes has even offered to defer his entire salary for the season to give the club as much financial breathing space as possible.

Much will be expected of Hayes and I am sure Sam Cosgrove will appreciate his service. Cosgrove chose to refuse a move to French club Guingamp after the club agreed a fee of around £2m for him. If he does decide to leave eventually, it will have a huge impact on Aberdeen.

44 goals in just 87 games for Derek McInnes’ team has been an outstanding return for the man they got from Carlisle United.

Hopefully Craig Bryson can finally get back to full fitness. The former Derby County midfielder has struggled badly with injury in his time north of the border but given his important contribution to Derby over eight years, a fully-fit Bryson can bring some much-needed drive and a competitive edge in midfield.

The likelihood for Gerrard is that he’ll have to plan for the season ahead without the goals from Alfredo Morelos.

The Colombia international has agreed to join Ligue 1 side Lille and they’ll get a regular goalscorer with a very dubious disciplinary record for their money.

At times, Gerrard loved Morelos and then the following month he would be exasperated with him. The priority for Rangers now is to get it right in the transfer market for a quality replacement.

Legendary status will be afforded to the players and manager if they can stop Celtic winning 10 titles in a row and the tone will be set for the rest of the season if they manage to secure all three points on the opening day.

The pressure of delivering their 10th title in a row will be resting on the shoulders of Celtic’s players every week of the 2020/21 season, you have to say they’ve relished it in recent seasons and possibly have thrived on it.

Fraser Forster not re-signing is a blow but it looks as though Celtic will splash out on his Greek replacement Vasilis Barkas.

It’ll take around £5m to secure his signature from AEK Athens and that alone is a measure of the financial strength Celtic have over every other club in Scotland.

Hamilton continue to survive on the lowest budget in the Scottish Premiership and I think manager Brian Rice wants to be more attacking as a team. They lose heavily sometimes but always seem to find a way to survive.

It’s good to see Micky Mellon get a taste of management in Scotland with Dundee United, after Robbie Neilson surprisingly left the club for the Hearts job.

I played against him a couple of times during his spell at West Brom but it’s his success as a coach at Shrewsbury and Tranmere that attracted United.

Dundee U vs Hibernian

Given his coaching background at Hearts, Celtic and with Northern Ireland’s U19s, Steven Frail is a good choice as his assistant.

United are the type of team that could finish in the top six after gaining promotion to Scotland’s top-flight.

They have a natural goalscorer in Lawrence Shankland, Mark Reynolds can be relied upon at the heart of their defence, and it’ll be interesting to see how 20-year old Luke Bolton will fare in his first taste of Scottish football on-loan from Manchester City.

Like United, St Johnstone will probably go with a smaller squad this season and Callum Davidson was welcomed with open arms after he was appointed as manager.

He has tough shoes to fill given that Tommy Wright consistently had his team over-achieving in the top six, qualifying for Europe regularly and winning a trophy. Follow that, Callum!

Jack Ross will know exactly what the expectations are of his Hibs side. He moved to Edinburgh at the end of last year and quickly realised that the club’s fans expect to be doing a lot better than lingering in the bottom six or in mid-table.

In Stevie Mallan and Scott Allan, he has a good mix in midfield but needs to find a replacement for the goal threat of Florian Kamberi. Even though he’s still registered with the club, he has burnt all bridges after his move to Rangers.

It was understandable that Kilmarnock turned to Alex Dyer when it very quickly turned sour for Angelo Alessio. Scotland boss Steve Clarke had him as a trusted No 2 and the appointment of Dyer would have been well received in the dressing room.

Emulating Clarke’s achievements at the club though is a tall order, but Killie should again be challenging for the top six with players like Greg Kiltie and Chris Burke to call upon.

Like most clubs, dealings in the transfer market are so limited these days and if, as reported, St Mirren boss Jim Goodwin can secure the signature of Marcus Fraser, that would be a boost to his hopes of getting off to a winning start.

Fraser was a reliable player at Ross County for five years and his experience should give the fans in Paisley a lift.

Livingston continue to surprise everyone with their ability to pick up points regularly and avoid any hint of being sucked into a relegation battle.

Marvin Bartley drives them on from midfield and I wonder if Lyndon Dykes will stay at Alderstone Road. His goals and ability to lead the line really does serve head coach Gary Holt well.

Stuart Kettlewell is now the main man in Dingwall after the dual managerial partnership with Steven Ferguson was changed. Kettlewell has been given a marvellous opportunity to make a name for himself and home form has to improve under his tenure.

Steven Robinson has worked wonders at Motherwell with his style of play and his eye for a player.

One player who will be looking to pick up from where he left off will be David Turnbull, previously a £3m target for Celtic.

If Motherwell get him back to his goalscoring best, they will more than likely challenge for European football again.