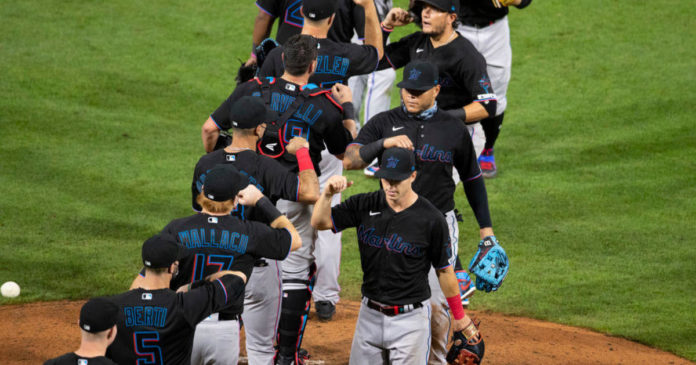 Major League Baseball on Tuesday postponed all Miami Marlins games through Sunday following a coronavirus outbreak on the team. More than a dozen players and staff members for the team have tested positive for the virus.

“Given the current circumstances, MLB believes that it is most prudent to allow the Marlins time to focus on providing care for their players and planning their Baseball Operations for a resumption early next week,” the league said in a statement.

Marlins CEO Derek Jeter weighed in on the decision. “All of our players, coaches and staff are, understandably, having a difficult time enduring this experience,” he said in a statement. “After receiving additional test results on our Major League team this morning, we reached out to the Commissioner’s Office with concern for the health and safety of our team as well as our opponents.”

The Marlins were scheduled to play against the Baltimore Orioles and the Washington Nationals this week. The announcement comes after the Marlins were stranded in Philadelphia on Sunday as they grappled with the outbreak following their series finale against the Phillies.

The league on Tuesday also postponed this week’s series between the Philadelphia Phillies and the New York Yankees “out of an abundance of caution.” The Yankees will instead face the Orioles for those scheduled days.

The Marlins will remain in Philadelphia for the time being, Jeter said, adding that the team is now testing daily for the virus.

The league stressed in its statement that out of the 6,400 tests conducted since July 24, “there have been no new positives of on-field personnel from any of the other 29 clubs.”

Before the announcement, Nationals manager Dave Martinez told reporters that he was “scared” about the rest of the season. “This is my family, you know, and I worry about these guys. I worry about everybody around us. I don’t want anybody to get sick,” Martinez said.

Commissioner Rob Manfred on Monday said owners had not yet considered canceling or suspending the season. “We expected we were going to have positives at some point in time,” Manfred told reporters. “I remain optimistic that the protocols are strong enough that it will allow us to continue to play.”