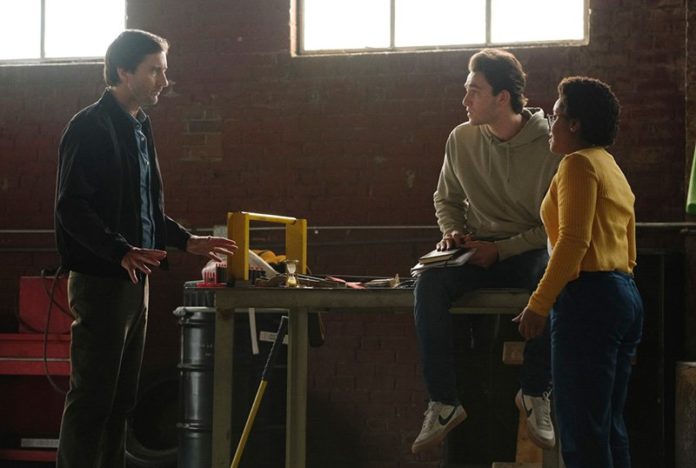 In the eleventh episode of DC’s Stargirl, while Pat uncovers new information about the ISA’s plan, Courtney’s life gets turned upside down when someone from her past arrives in Blue Valley. 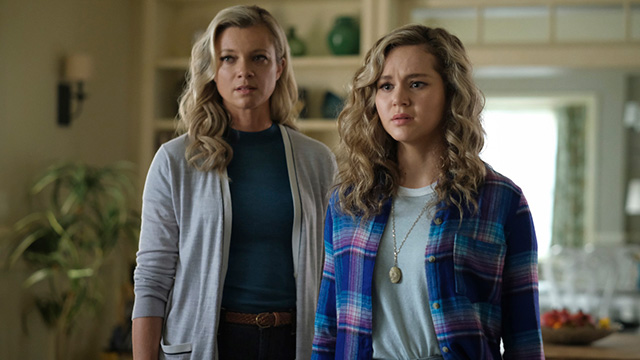 Janitor Justin is chased away by a farmer when he asks him to help him find his “gallant white steed.” Justin is struggling with his memories, but he recalls seeing Pat, calling him “Starman’s squire” and hoping Stripesy can help him. Elsewhere, a bus arrives in town, dropping off a man with a locket containing a picture of a baby who eventually finds himself outside of Courtney’s house. Inside, a grieving Courtney listens to Pat and Barbara talk about Brainwave killing his own son. Barbara wants to contact the authorities, but Pat says they don’t know who might be listening. Pat wants Barbara to take Courtney and Mike and leave, but she doesn’t want to leave Pat behind in Blue Valley, especially when she knows Jordan is planning something terrible. Pat says if they stay, they all have to act like everything is normal.

The doorbell rings and Mike tells Courtney someone is there to see her. The man from the bus claims to be Courtney’s father, Sam Kurtis (Geoff Stults). Courtney doesn’t believe that Sam is her father. Sam shows Courtney his matching locket, saying he gave the other to her. Courtney still doesn’t believe Sam or her mother and speaks to Pat alone. If Starman isn’t her father, Courtney feels unsure about her purpose now and thinks that it’s her fault Henry and Joey got killed. Mike comes in to demand what’s going on and Pat snaps a little, before telling his son that everything will be okay. Mike doesn’t believe him, though.

Downstairs, Barbara tells Sam she looked for him for over a year after he didn’t show up for Christmas and wants to know why he’s here after a decade. Sam says he’s been thinking about reaching out for months and that he just wants to get to know his daughter. 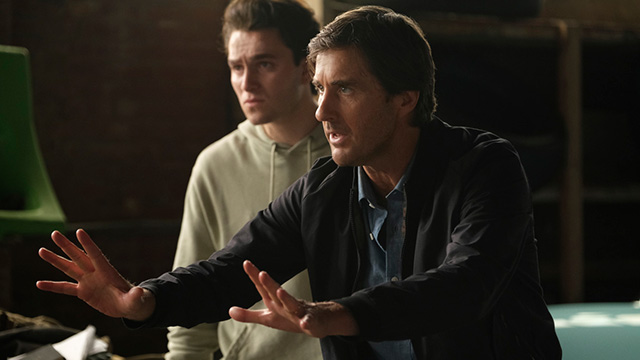 At school, Justin is still struggling with his memories. He sees an ad with Pat’s face and says he can help him before grabbing his sword. Meanwhile, Courtney and Sam go for a walk to chat. When Sam begins talking about the last time he saw Courtney when she was four, Courtney recalls the same memories. Sam says he’d give anything to go back in time and do things differently. Courtney lets Sam take her for a quick breakfast to give him the chance to explain.

At the shop, Pat finds Rick and Beth waiting for him. Before he gets the chance to talk, though, Justin appears with his sword asking Stripesy for his help. Justin suddenly begins to hallucinate that Pat is Dragon King and attempts to attack, but Pat is able to talk him back to reality and tells his old friend they’re going to take care of him.

At The American Dream, Jordan tells Dr. King he is sorry for the loss of his son but King doesn’t seem to care. He tells Jordan that Dr. Ito restored his memories and reveals that Stargirl is Courtney Whitmore, whose stepfather is Pat Dugan, aka Starman’s old sidekick Stripesy. Jordan is visibly upset by the news, and when King says he’s going to go kill Courtney and Pat, Jordan tells him no. Jordan gets angry when King digs into his mind and uncovers that Jordan is hesitating because of Barbara. Jordan says the loss of Courtney would devastate her.

King reminds Jordan he killed his own wife and son for Jordan’s new America, and offers to erase Barbara’s memories of Courtney and Pat, since he’ll soon be in the heads of millions reprogramming them all for the better, anyway. King adds that when he killed Henry, he felt his powers grow, as though he had absorbed his son’s powers. He expects he’ll be able to reprogram half of the country, not just six states. He tells Jordan to make up his mind soon, or King will do it for him. 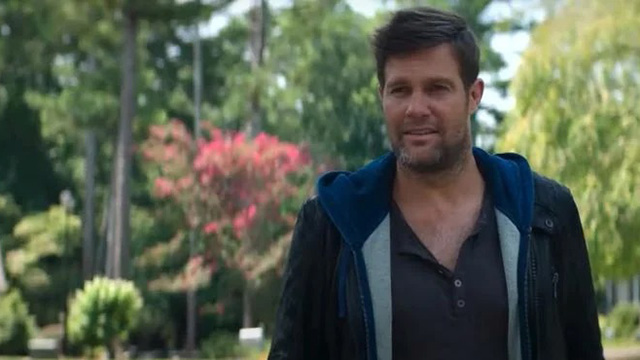 At breakfast, Sam catches up with Courtney and asks if maybe one day she’ll come to visit him in California so they can get to know one another. Courtney hesitantly agrees. Back at the shop, Pat explains to Rick and Beth that Justin is the Shining Knight, the leader of the Seven Soldiers of Victory. Pat hands a photo of the group to Justin, hoping it will help jog his memories. Rick isn’t sure about helping Justin, though, since the janitor just tried to kill Pat with his sword, which we learn is Excalibur. Pat asks Justin to try to remember where he first got the sword, saying it’s a great story.

Justin, who apparently comes from the time of “knights and dragons,” remembers King Arthur bestowing the sword upon him. Pat asks him to try to remember why he came to Blue Valley. Justin says that he had to follow the dragon, but he was captured and they stole his identity from him. Justin tells Pat none of them are safe. He then spots STRIPE, and tells Pat he has built a fine suit of armor.

Pat brings Justin home to rest and tries to explain what happened to Barbara. He also theorizes that the ISA is planning some kind of mass brainwashing. Outside, Courtney and Sam arrive home and they sit on the steps to finish their chat. Sam talks about their pair of lockets, calling them special, explaining they were made by a “fancy designer back in the day” and calls them valuable. He thinks if he sold them, he could put a deposit down on a new place in Cali. Once he’s settled in, she can come visit. Courtney hesitates, then gives her locket to Sam. Sam tells his daughter he’ll be back before he takes off with both lockets.

After Sam leaves, Pat tells Courtney that if she needs to vent or yell at someone, he can take it. Whatever she needs, he’s there. Courtney starts crying and hugs Pat as Barbara watches from the stairs. After, Pat chases after Sam and asks him what the hell he’s thinking. Pat tells Sam he cares about Courtney and how she has worn that locket every day ever since Sam gave it to her. Sam says he’ll make it up to Courtney someday; Pat tells him to never come back. When Sam makes a comment about how Barbara still looks good but not as good as when he “had her,” Pat punches him, knocking him to the ground before walking away. 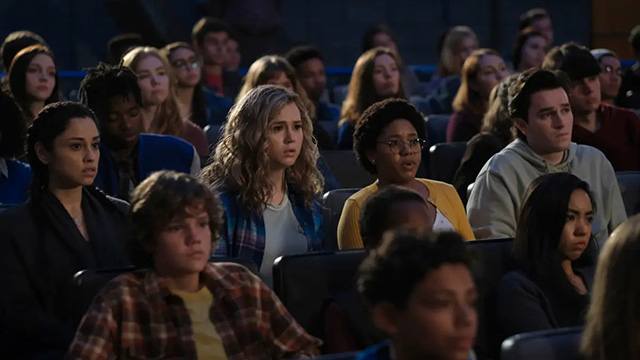 In the basement, Barbara apologizes to Courtney for reaching out to her dad because she knows the kind of person he is. Courtney says it’s okay, she needed to know. Courtney believes she put everyone in danger over a fairytale about her dad being Starman. Barbara is at a loss because she knows families in Blue Valley are in danger and need protection, but if Courtney stays and fights, she might die. When Courtney picks up the Cosmic Staff, the staff doesn’t light up like normal, causing Courtney to believe it isn’t meant for her anymore. She tells her mom she’s ready to leave Blue Valley.

At The American Dream, Jordan has Sharpe hack into Barbara’s computer to restore her history and discovers that she has been researching the JSA and ISA, including how Icicle killed Starman. At school, Courtney tells Beth, Yolanda, and Rick that she’s not Stargirl and her father was not Starman. Beth says Courtney is Stargirl, and Yolanda adds that her dad wasn’t Wildcat but she is now. Courtney reveals the staff won’t work for her anymore and thinks it’s because the staff knows she isn’t Starman’s daughter. Courtney doesn’t want anyone else to get hurt because of her.

The four sit in the auditorium among their teachers and peers as the school holds a memorial for Henry, in which Henry’s dad and killer Dr. King shows up to speak. King uses his powers to speak to Courtney in her head, implying she’s to blame for Henry’s death and challenging her to go after them. Courtney rushes home and tells Pat Brainwave remembers who she is and desperately tries to get the staff to work. Pat tells her that the staff always knew Starman wasn’t her father and that it chose her because it believed in her. The Cosmic Staff is just waiting for her to believe in herself again, that “heroes can come from anywhere.” Pat leaves her alone in the basement to give Courtney time to think, but Courtney says she needs Pat and Barbara with her.

With her mom and stepdad standing behind her, Courtney grabs hold of the Cosmic Staff and focuses. After a few moments, the staff lights up, glowing brighter and more powerfully than ever. Justin sneaks downstairs, and upon seeing Courtney says, “Our queen has risen.” Meanwhile, Jordan visits with King at the ISA headquarters, giving him permission to take out all of them: Courtney, Pat, Barbara, and even Mike.

What did you think of the new episode of Stargirl? Let us know in the comment section below!