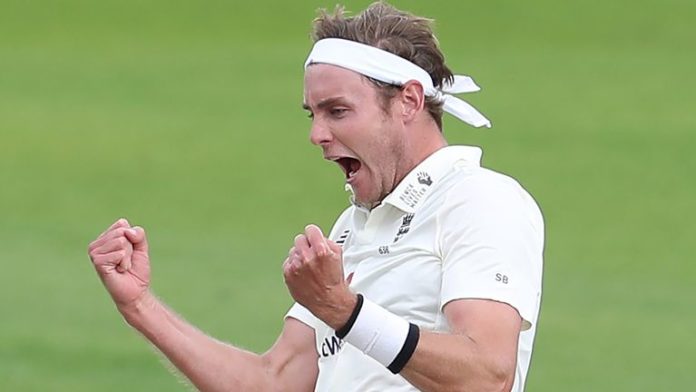 “We’ve got to understand how lucky we are to be watching them go about their business…it couldn’t be a better place for a young fast bowler to learn their trade.”

England captain Joe Root says his team should consider it a “privilege” to share a dressing room with the country’s two highest Test wicket-takers – James Anderson and Stuart Broad.

Broad joined Anderson as the only Englishmen to claim 500 Test wickets when he dismissed West Indies opener Kraigg Brathwaite on the final day of his side’s series-clinching victory in the third Test at Old Trafford.

“We’re looking at two of England’s best bowlers of all time,” said Root after his team – who had trailed in the series – dismissed West Indies for just 129 to complete a 2-1 success and regain the Wisden Trophy.

“To be playing in the same team as both of them – we’ve got to understand how lucky we are to be watching them go about their business.

“Playing alongside them, seeing them operate day in, day out – it couldn’t be a better place for a young fast bowler to come in and learn their trade.

“It’s a real privilege to play alongside both Jimmy and Stuart and hopefully that’s going to happen for a lot longer as well.”

Broad – who was controversially omitted from the England team for the first Test at the Ageas Bowl – finished with match figures of 10-67 in the decider, the third 10-wicket haul of his international career.

Fittingly, the 34-year-old sealed his side’s thumping 269-run victory at Old Trafford with the final wicket, having Jermaine Blackwood caught behind to advance his Test total to 501.

“For him to come back into the team and have such an impact is testament to how good a player he’s been for England over such a long period of time,” Root said.

“It sums Stuart up, he seems to get on those hot streaks and have a real impact in games and I’m really pleased for him to get to that milestone – 500 Test wickets is a phenomenal achievement.

“He’s the sort of guy that really grabs a game and wrestles it in your favour. He wants to be part of those big occasions and he wants to take the ball when you’re up against it.

“There are so many different occasions he’s done that – any number of Ashes series, the match-winning spell against South Africa at Johannesburg (in 2016), here in this series and many more.”

Anderson, who turns 38 later this week, ended West Indies’ second innings wicketless, but fellow seamer Chris Woakes starred with 5-50 as the tourists were hustled out in only 37.1 overs.

“I thought we were outstanding with the ball on that surface,” Root added. “You look at the talent among those guys and it offers a huge amount.

“You feel they could exploit a lot of different surfaces around the world.”