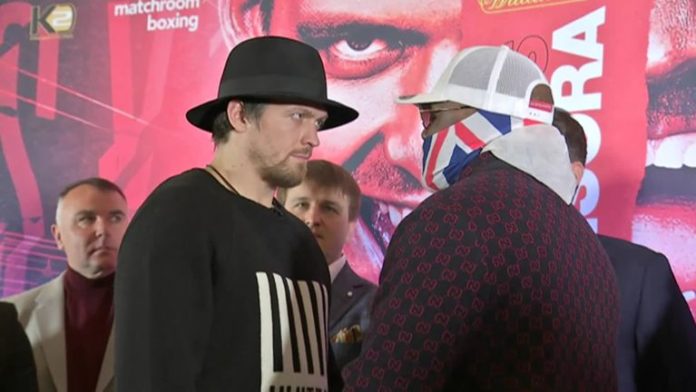 Date and location still being finalised; fight had been due to take place at The O2 in May

Chisora was set to welcome Usyk to the upper echelons of the top division in May at The O2 in London but it was postponed due to the coronavirus pandemic, and a new date and location are still being finalised.

“[Promoter] Eddie Hearn is having fights in his garden – Dillian Whyte is having a huge fight with Alexander Povetkin on August 22 [live on Sky Sports Box Office].

Usyk posted social media footage of himself ominously calling Chisora’s name while jogging on the beach.

The former undisputed cruiserweight champion from Ukraine has had just one fight in the heavyweight division but is the mandatory challenger to the WBO belt held by Anthony Joshua.

That status will be put at stake by Usyk against Chisora, who had warned: “Basically, everything I’m going to do is for me to take what he has and make it mine.

Usyk replied: “Normally I face this kind of plan, every fight. If you want to hit the target, you need to see the target, because he can throw as much punches as you can, but you need to land them into the target.”

More recently, Chisora has been in “dialogue” to make his MMA debut with the Bellator promotion, according to its president Scott Coker.

“We’d love to have him,” Coker told Sky Sports. “If he has time in his schedule to compete in MMA, we’d love to put him in there and test him out.

“Depending on his schedule, we’d love to get him into our rotation, if time permits.”