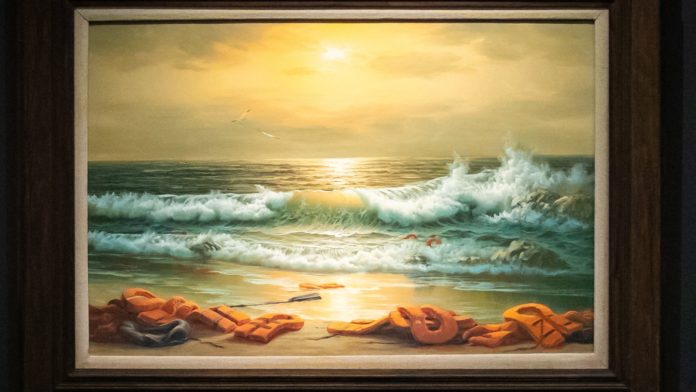 Three Banksy oil paintings which reference the European migrant crisis have sold for £2.2m in a charity auction raising money for a hospital in Bethlehem.

The works, titled Mediterranean Sea View 2017, were originally estimated to sell for between £800,000 and £1.2m in the Sotheby’s sale.

The triptych of paintings depicts 19th century-style Romantic seascapes with added life jackets and buoys in reference to the deaths of migrants travelling to the EU during the 2010s.

The anonymous street artist from Bristol created the works for his hotel in Bethlehem, called The Walled Off Hotel, which contains a museum and gallery.

The hotel, which overlooks the West Bank wall that divides the town, bills itself as having “the worst view of any hotel in the world” and is filled with original Banksy artwork.

Proceeds will go to the Bethlehem Arab Society for Rehabilitation and will be used to build a new acute stroke unit and the purchase of children’s rehabilitation equipment.

Before the auction, Alex Branczik, Sotheby’s head of contemporary art for Europe, said Banksy “spotlights one of the burning issues of the 21st century” with the paintings.

He added: “In Rembrandt to Richter, this triptych hangs in Sotheby’s galleries alongside works by some of history’s greatest landscape painters, including Bellotto, Van Goyen and Turner.

“Banksy’s work, however, stands alone for its potent political message.”

In his most recent stunt, Banksy spray-painted the inside of a London Underground train carriage with messages about the spread of coronavirus.

The artwork was removed by cleaning staff who did not realise that Banksy was behind it.