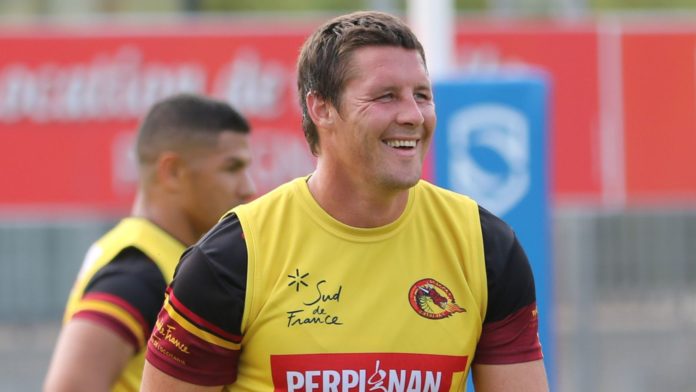 There is a corner of the south of France which, for now, is almost a mini-Wigan.

The latest addition to the group of players with a connection to the Lancashire town’s rugby league team at Catalans Dragons is Joel Tomkins, who moved from Hull Kingston Rovers on a two-year contract over the winter.

Even the other British player in the squad, Matt Whitley, can tenuously be included in that group because while he did not play for Wigan, he is originally from just down the road – albeit dangerously close to rivals St Helens – in Billinge.

“It’s weird and if you’d have told me five years ago I’d be in France playing with Sam, Micky, Tom Davies, Lewis Tierney, I’d have thought you were mad,” Tomkins, told Sky Sports.

“It’s funny how things work in professional sport and it’s great we’ve got this group of guys over here.

“For the game over here growing, I think it’s good they have some guys from England coming over playing and I think it generates interest.”

If you’d have told me five years ago I’d be in France playing with Sam, Micky, Tom Davies, Lewis Tierney, I’d have thought you were mad.

Their presence adds to what is something of a cosmopolitan squad head coach Steve McNamara has assembled at the Dragons, with a strong French backbone boosted by Australian stars like James Maloney and Israel Folau, plus representatives from the Pacific Islands.

Having his younger sibling and several other familiar faces around has helped Tomkins settle in well at his new club, even with the chaos caused by the coronavirus pandemic.

The 33-year-old is getting to grips with learning a new language as well, even if by his own admission his French is only coming along slowly.

“It’s been difficult with the whole situation, but everybody tries to buy in and we try to speak as much French over here as possible,” Tomkins said.

“The guys over here are great, we’ve got a great group of players and the staff are brilliant as well.

“It’s been really enjoyable – obviously frustrating with everything that has gone on, but I think we’ve got to count ourselves lucky as to how it’s affected other people around the world.”

Even before Covid-19 took hold, Catalans had endured a disrupted season due to games being postponed.

It’s been difficult with the whole situation, but everybody tries to buy in and we try to speak as much French over here as possible.

This Sunday’s Super League restart match against St Helens as part of the behind-closed-doors double-header at Headingley was postponed from earlier in the season due to last year’s champions being involved in the World Club Challenge.

The Dragons also had their clash with Wakefield Trinity postponed due to Storm Ciara and then saw the match against Leeds Rhinos called off before the season was eventually suspended as a result of the pandemic.

For August at least, Super League’s French representatives will be playing all their matches in England. However, the team will be flying in and out on match-days, allowing them to still be based in Perpignan full-time.

“We would have either had to go and set up camp in England for four or five weeks, or charter flights and fly in and out,” Tomkins said.

“I think the guys at the top of the club got together and this is what they decided. As players, we were prepared to do either way, but I think the boys are pretty happy with the situation we’ve got.

“The owner, Bernard Guasch, has been really good. He’s obviously had to put his hand in his pocket quite a bit over this period and he’s agreed to charter flights for us, so we can get in and out on the day and limit the risks, I suppose.”

Lockdown restrictions being eased in France before they were in England meant Catalans were able to return to training ahead of the clubs based on these shores.

It has not quite been a complete return to normality for them, with precautions to guard against the risk of infection in place, but Tomkins is pleased to have been able to get nearly a month of preparation under his belt.

“I think we were probably the first team to get back in, obviously with the restrictions being slightly different over here in France compared to England,” Tomkins said.

“Obviously it’s not training as normal, we’re still in smaller groups and things like that, but we’ve still managed to get quite a lot of quality work done over this past month. We’re as well-prepared as we can be in the circumstances.

“It’s been a very weird situation for everybody, so just getting back to a bit of normality has been good for us. Once we start playing, that bit of routine is just what everyone is looking forward to now.”