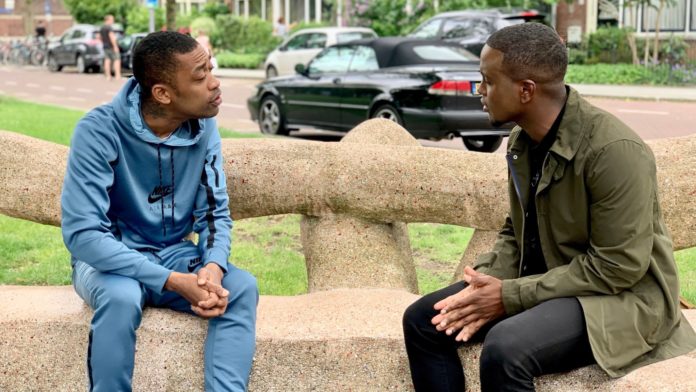 Wiley has refused to distance himself from most of the antisemitic comments he posted on social media – but has apologised for “generalising” after a fallout with his manager, who is Jewish.

Speaking exclusively to Sky News in an interview that you can watch online and on TV from 7pm, the grime artist also said he will hand back his MBE following calls for him to be stripped of the honour.

“I just want to apologise for generalising and going outside of the people who I was talking to within the workspace and workplace I work in,” Wiley said.

Wiley – known as the “Godfather of Grime” and whose real name is Richard Kylea Cowie – has denied he is racist despite posting antisemitic tropes on social media in which he described Jewish people as “cowards and snakes”, and also compared Jews to the Ku Klux Klan.

At times he became agitated when pressed on his two-day antisemitic Twitter tirade, yelling directly at the camera and, at one point, jumping up and pounding his chest.

His account has since been permanently suspended by Twitter in line with its rules on hateful conduct, and the social media platform has apologised for the time it took to respond.

A large number of his tweets have been reported to the Metropolitan Police, citing hate speech and incitement to violence.

The rapper’s former manager John Woolf, who is Jewish, has “cut ties” and said he would no longer represent the artist.

“I’m not racist, you know. I’m a businessman. My thing should have stayed between me and my manager, I get that,” Wiley said.

When asked if he accepts that his comments were antisemitic, he said: “My comments should not have been directed to all Jews or Jewish people.”

Many of his tweets on his account, which had half a million followers, had been deleted by the time he was permanently suspended by Twitter on Wednesday.

The Campaign Against Antisemitism has referred one tweet to the police, saying it was an act of incitement to racial hatred as it said “hold corn”, which is slang for “take bullets”.

He sought to justify his comments by suggesting that “the Jewish community are powerful within the music business”.

The UK’s largest Jewish group – The Board of Deputies – had written to Twitter, calling for Wiley to be permanently banned from the site.

“He has single-handedly caused a huge amount of alarm to Jews and non-Jews. We don’t accept his apology,” said Marie van der Zyl, president of the Board of Deputies of British Jews.

“To be victimised and vilified because you are Jewish is traumatic. In my view, he’s guilty of incitement to racial hatred. He should be prosecuted and never allowed to post on social media again.”

The east London-born rapper received an MBE in 2018 for his services to music and there are calls for the honour to be forfeited.

He claims his former manager Mr Woolf is in possession of his MBE and he would be willing to give it up as he “never wanted it.”

“Take it back. Listen to this I just told you, I never had an MBE,” he said.

“John Woolf’s got the MBE. I have never had the MBE. It’s framed in his house. Now, who was the MBE for, really? Don’t think that I was sitting here like, ‘where’s my MBE? I need my OBE. I need my knighthood.'”

The rapper went on to say: “I never felt comfortable going to get it. Just look at Britain’s colonialism history.”

A representative for Mr Woolf said: “The MBE has been framed for Wiley and has been ready for his collection, which he is yet to do.”

Wiley’s comments have led to condemnation from celebrities, campaigners and MPs, including the home secretary and the prime minister.

“I definitely think Wiley’s tweets are dangerous. They can incite violence. I know from first-hand how this stuff trickles down and crosses over to real life,” said Ava Vidal, comedian and anti-racism campaigner.

Asked about what he would say to his fans who may incite hatred or commit violent acts against Jewish people, Wiley replied: “Well, you’ve never seen me commit a violent act towards Jewish people or the Jewish community”

He added: “You know fans are fickle. Don’t wind me up. I’m 41-years-old. It’s not like I have got a big bag of fans. Leave it. I’m not Dave. I’m not current. I’m at the end of my career rather than the beginning.”

If Wiley’s right about being towards the end of his career, his antisemitic comments may serve to hasten his departure from the grime scene.