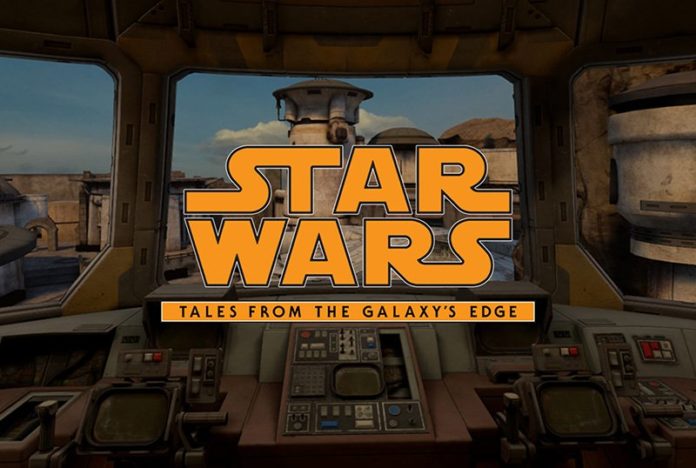 A new Star Wars: Tales from the Galaxy’s Edge video has revealed a behind-the-scenes look at the upcoming Oculus VR experience developed by ILMxLAB and inspired by Star Wars: Galaxy’s Edge, the Star Wars-themed land at Disneyland and Disney’s Hollywood Studios at Walt Disney World (via StarWars.com). The title is set to launch later this year on Oculus Quest. You can check out the video now in the player below!

In Star Wars: Tales from the Galaxy’s Edge, you’ll play as a droid repair technician who crash lands on Batuu after a pirate attack. In typical Star Wars fashion, you’ll quickly get swept up into a grand adventure on the outskirts of Black Spire Outpost.

You can converse with Seezelslak (Bobby Moynihan) in his cantina and be transported to other places and times in the Star Wars galaxy through his legendary tales. Or, you can receive important missions to complete in the wilds of Batuu, encountering new and iconic characters along the way, like the pirate Tara Rashin (Debra Wilson).

Star Wars: Tales from the Galaxy’s Edge will give players the opportunity to live their own adventure and explore a new part of a galaxy far, far away in virtual reality. The original story will feature both new and iconic characters from the Star Wars universe with multiple styles of gameplay and difficulty settings to accommodate a wide variety of players, from Star Wars fans to VR gamers alike.

RELATED: CS Comics: 1st Trip to Galaxy’s Edge for Rise of the Resistance!