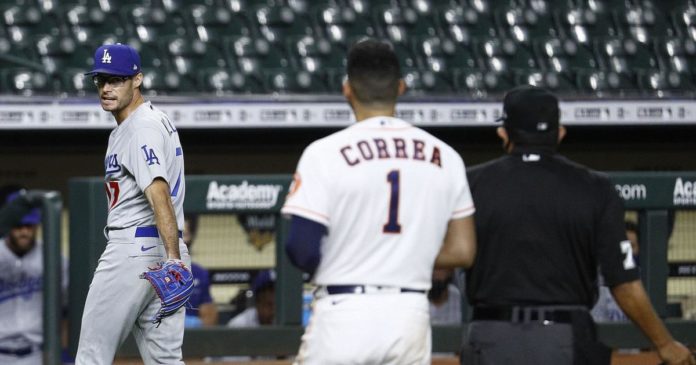 Los Angeles Dodgers pitcher Joe Kelly has been suspended for 8 games after throwing a pitch behind Alex Bregman’s head and taunting Carlos Correa of the Houston Astros on Tuesday. Despite myriad precautions being taken by MLB amid the coronavirus pandemic, both teams left their benches and converged around home plate due to Kelly’s actions, and there was little social distancing between players.

Some form of retaliation from the Dodgers against the Astros was expected this year, following the revelations of the 2017 sign stealing scandal during the offseason. The Dodgers lost to the Astros in the 2017 World Series — and the scandal revealed that during that year, the Astros stole signs and illegally relayed what pitch was coming to their hitters in real time.

In the sixth inning, on a 3-0 count, reliever Joe Kelly threw a pitch high and inside that ended up behind Bregman’s head.

Two batters later, Correa came to the plate and struck out to end the inning on a low breaking ball. According to CBS Sports, Kelly was picked up by the on-field microphones taunting Correa by saying “thatta boy, nice swing!”

The two continued yelling at each other as Kelly walked back to the dugout and made a few mocking faces. Eventually, tensions boiled over and both benches cleared. There weren’t any physical altercations.

Kelly will remain eligible to pitch while he appeals his suspension. Dodgers manager Dave Roberts was suspended for one game and Astros manager Dusty Baker was fined.

Kelly was previously ejected for intentionally throwing a ball at a batter in 2018 when he was with the Boston Red Sox. Kelly retaliated against the New York Yankees’ Tyler Austin after he slid into Red Sox infielder Brock Holt. Both benches cleared during that incident.