Home Culture ‘Immigration Nation’ offers a searing portrait of ICE policy, from inside and... 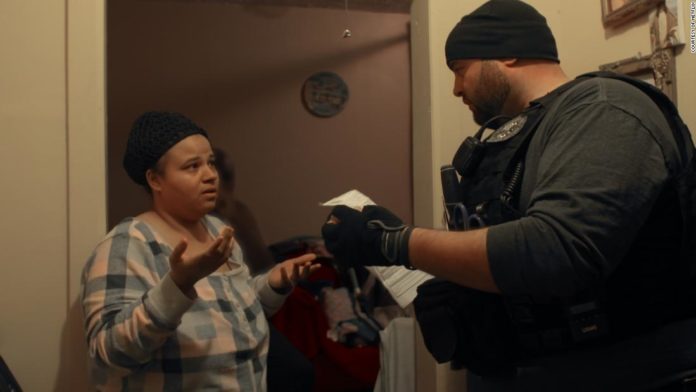 Netflix, it’s worth noting, covered much of this ground last year in another six-part series, “Living Undocumented.” What sets “Immigration Nation” apart is fly-on-the-wall coverage of US Immigration and Customs Enforcement personnel (presented using only their first names), providing an opportunity to tell their side of the story but seldom in a way that’s flattering to the agency.
To their credit, directors Shaul Schwarz and Christina Clusiau — who spent three years assembling the series — present numerous aspects of the family-separation issue. Still, it’s hard not be disturbed seeing parents pulled away from crying spouses and children, or a 63-year-old grandmother deported to potentially dangerous circumstances in the dead of night, after seeking asylum to protect her 12-year-old granddaughter.
Attorney John Amaya, ICE’s deputy chief of staff during the Obama administration, is among those interviewed, describing the current strategy as being “to tear families apart, which to me is unconscionable, and bring them maximum pain.”
That perception might explain why the administration would agree to cooperate with this project, and reportedly regret that decision later — threatening legal action “to block parts of it from seeing the light of day,” according to the New York Times.
ICE officials are shown publicly stating that they target only those who have committed crimes, but are also seen encouraging agents to apprehend “collaterals” — that is, undocumented people swept up during operations who were not being pursued.
In another story, a father is held for months while his young son must grapple with whether to return to his home country or wait with a relative, hoping to somehow be reunited.
Ultimately, “Immigration Nation” reinforces a feeling of hopelessness about dealing with immigration. Interviews with ICE agents, immigrants and traffickers yield little sense that the pattern can be broken, and conflicting statements about whether the new policies represent an effective deterrent. Instead, the final hour illustrates the human cost in those who have died in the desert, underscoring the desperation that drives them.
The ICE agents featured seem to understand that they have an image problem, while exhibiting varying degrees of concern about that status.
“ICE isn’t a fan favorite of anybody’s,” says one official in the New York field office, while another agent notes, “We constantly look like we’re the bad guys.”
It’s difficult looking good, though, as family members cry while loved ones are taken away, or when agents counsel those being deported to come back “the right way,” even as the documentary illustrates how the barriers to entering legally have been raised.
The agency’s hardened posture is clearly embraced by some of its employees (“We’re finally able to do our job”), but others exhibit little empathy and a reluctance to take responsibility. “I don’t make the rules,” one agent says. “I just enforce them.”
Experts featured within the program stress that conflict over immigration policy didn’t begin with Donald Trump, and that ICE is guided by the politics of an issue that was central to his campaign. While the current administration has defended tougher policies, the film raises serious questions about whether they are advancing the stated objectives.
The intense politicization of immigration has turned even the promise affixed to the Statue of Liberty into the subject of debate. “I think the American dream sometimes becomes a nightmare,” an incarcerated immigrant says somberly.
Far from a dream, “Immigration Nation” conveys the pain associated with that reality. If the goal is to craft policy that’s both effective and humane, watching it leaves the sobering impression that what’s currently in place isn’t the right way.
“Immigration Nation” premieres Aug. 3 on Netflix.