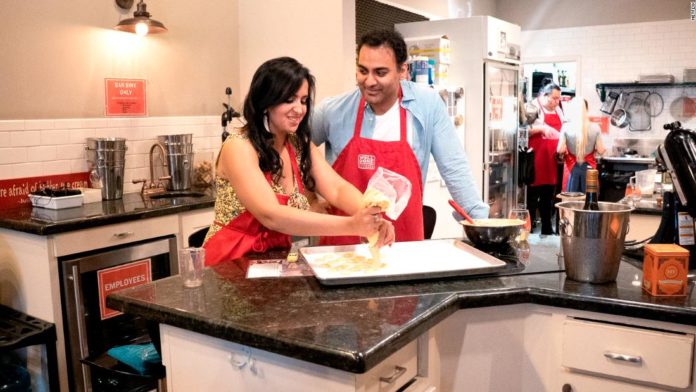 She is the creator of the hit Netflix series that offers an inside look into the work of Sima Taparia, a Mumbai-based matchmaker who travels the world helping her client find their “life partners.”
After the series recent debut social media was filled with complaints about everything from the privileged lifestyles of some of the participants to the desire that was expressed by some to be matched with “fair” potential spouses.
Mundhra told CNN the complaints are, in her view, completely valid.
“I totally understand why people feel like ‘You’re exposing, some of them are problematic things that are in our culture,'” she said. “But that’s where we are. I would never want to make a show that sanitizes that because I think we need to have those conversations and we need to push to do better as a community and as a culture.”
Mundhra is well versed in the issues being raised.
She met Taparia years ago, when a then 20-something Mundhra hired Taparia to help her find a husband.
“Sima Auntie,” as she is known, later appeared in Mundhra’s 2017 documentary, “A Suitable Girl.” The film was co-directed by Sarita Khurana and explored the experiences of three Indian women searching for husbands.
Mundhra would later be nominated for an Academy Award in the best documentary short subject category for her 2019 film, “St. Louis Superman.”
The story of “Sima Auntie” was one Mundhra wanted to expand on and share.
The filmmaker said casting the participants in “Indian Matchmaking” proved challenging.
“It’s difficult to sort of convince people who are very private about a process and private about their lives to sort of go through it with cameras on for a dating show,” she said. “But there were some people who were up for the adventure and they were the ones who were more keen to work with us.”
“Through the casting process we sort of pushed for as much diversity as possible,” she added. “Geographically, ideologically, diasporically. We tried to really show, to whatever extent made sense and was authentic to the world, as many different points of view as we could.”
That authenticity lent itself to plenty of meme worthy moments and “characters,” like Aparna Shewakramani, a Houston-based attorney with highly selective criteria for a future husband (she is not a fan of men who are funny or who don’t know that Bolivia has salt flats).
Mundhra said that like all the participants, Shewakramani was encouraged to be herself.
She was “amazingly candid and she says some things that might rub people the wrong way, but she owns it and she’s very specific about what she wants,” Mundhra said of Shewakramani.
“She holds herself to a really high standard, so she holds other people to a really high standard, whether it’s matchmakers or a potential life partner,” Mundhra continued. “Lke all of us, she’s a work in progress. I think she’s learning more about herself through this process, just like I did just like, we all do, when we’re dating and sort of navigating, trying to figure out how much of ourselves do we compromise.”
Such representation is very important to Mundhra, who noted there wasn’t much on screen that reflected her life as a South Asian person growing up in the ’90s.
It’s why she took her work on “Indian Matchmaking” so seriously, even as she acknowledges the series is “a very narrow slice” of South Asian life.
She theorizes that is also one of the reasons why the show has become a lightening rod for criticism, because people are so starved for such representation.
“There are very few [shows] that represent the South Asian experience, so I think we are looking for each one of them to represent a lot of the South Asian experience, when in fact we are a billion and a half people around the world,” Mundhra said. “It is an extremely diverse culture and there is no one way to completely tell the story of South Asians and their relationship to anything, whether it’s marriage religion or family.”
Now 40 and married to a man she met in college (not a match made by Taparia), Mundhra said she is adjusting to the attention brought by her hit Netflix series and is as hopeful as viewers that there will be a season 2.
She’s also grateful, she said, for conversations surrounding her show that could help spark change.
“Even for me as a creator and a producer, I need to push and be pushed to do better,” she said. “Hopefully the show sort of kicked a hornets nest and gets people thinking within themselves, talking within their own families and on social media. I think that will open the door for even more sorts of varied experiences and even more accountability.”