Home World The art world has a money laundering problem 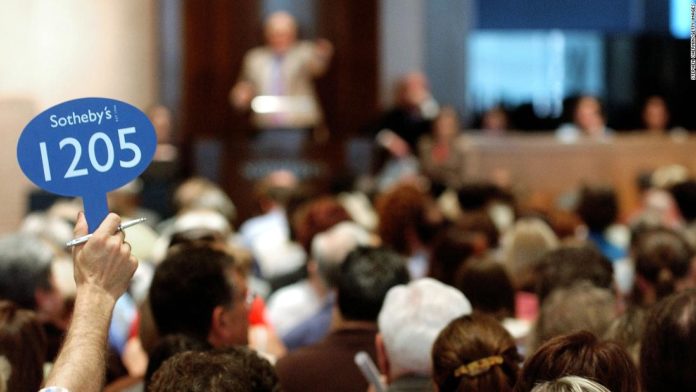 It’s all part of the ultra-secretive art world, according to a bipartisan Senate investigation released Wednesday. And that’s why it’s susceptible to money laundering and sanctions evasion, the report found.
The Senate report details how a pair of Russian oligarchs with ties to Russian President Vladimir Putin allegedly seized on the secrecy of the art industry to evade sanctions by making more than $18 million in high-value art purchases.
“This is just the tip of the iceberg,” investigators for the Permanent Subcommittee on Investigations told reporters on a call. The art world is considered to be the largest legal unregulated industry in the United States, according to the Senate investigation.
And it has been booming: Art sales surpassed $64 billion around the world last year, with 44% of those taking place in the United States, according to an Art Basel and UBS report that the Senate investigation cited. Sotheby’s alone raked in $4.8 billion in sales last year and Christie’s sold Leonardo da Vinci’s Salvator Mundi for a record-shattering $450 million in 2017.
Like other auction houses Christie’s and Sotheby’s — which were not accused of wrongdoing — have anti-money laundering policies in place, although they are not legally required to do so. The Senate investigation described those safeguards as “lax” and found that they were “easily circumvented.”
“Secrecy, anonymity, and a lack of regulation create an environment ripe for laundering money and evading sanctions,” the report found.
Christie’s told CNN Business it has “zero tolerance” for sanctions evasion and thanked the Senate subcommittee for its investigation, which the auction house cooperated with. Christie’s also said it welcomes the opportunity to work with US lawmakers on “appropriate and enforceable” anti-money laundering “guidelines” for art trade.
Sotheby’s, which last summer reached a $3.7 billion deal to be taken private by billionaire Patrick Drahi, told CNN Business in a statement: “Sotheby’s takes Anti-Money Laundering and United States sanctions policies extremely seriously and voluntarily participated in the Senate Subcommittee’s investigation.”

In a glaring example, the investigation traced more than $18 million in expensive art purchases through auction houses and private dealers back to anonymous shell companies that appeared to be linked to Arkady and Boris Rotenberg, sanctioned Russian oligarchs.
The Rotenbergs were sanctioned in March 2014 by President Barack Obama in response to Russia’s annexation of Crimea. The investigation also found those shell companies engaged in more than $91 million of overall transactions in the financial system after those sanctions were imposed.
“If wealthy Russian oligarchs can purchase millions in art for personal investment or enjoyment while under sanction, it follows that their businesses or hidden resources could also continue accessing the US financial system,” the Senate investigation said.
Representatives for Russian companies owned by the Rotenbergs did not respond to requests for comment.

The Rotenberg example and many other investigation details highlight the fact that, unlike selling stock or making routine bank transfers, art sales through auction houses are not subject to anti-money laundering provisions in the Bank Secrecy Act. When art is sold, according to the report, sellers are not required to confirm the identity of the buyer nor to make sure the artwork isn’t being used to launder dirty money.
The report calls on Congress to pass legislation that would force auction houses like Christie’s and Sotheby’s to comply with anti-money laundering laws. The United Kingdom and the European Union have taken similar steps in recent years.
Auction houses told Senate investigators they rely on financial institutions to ensure the integrity of the funds used to buy artwork. Public auctions at auction houses accounted for about 42% of sales last year.
Most sales take place far away from public scrutiny through private dealers, who are not subject to anti-money laundering requirements.
For instance, the Senate report interviewed one private art dealer based in New York who had no written AML policies and “instead relied on her gut.” She also said “she relies on the advice of lawyers with expertise in AML and related areas and looks for potential red flags in transactions.”

In the example of the Russian oligarchs, the investigators found that most of the Rotenberg-linked art purchases were facilitated by Gregory Baltser, a US citizen with an art business in Moscow called BALTZER. Baltser personally took the title to the art, ensuring that due diligence was done only on him — not on the ultimate buyers, the report said.
A lawyer representing Baltser and his art business denied allegations of masking purchases made by the Russian oligarchs.
In a separate statement to CNN Business, Christie’s said it took “appropriate and responsible measures” to stop transactions with Baltser “once informed of his business dealings with sanctioned entities as well as his efforts to conceal that information.”
In 2014, Baltser signed an agreement with Christie’s that allowed him to bid at auctions on behalf of his clients, whom he pledged to conduct money laundering and sanctions checks on, according to investigators. A London attorney certified to Christie’s at the end of 2014 that even though BALTZER had a “significant number of Russian clients there were no transactions” that fall under recent sanctions against Russia, the report said.
But the London attorney failed to provide a similar certification for the following three years, and in 2018 Christie’s renegotiated its deal with BALTZER to require client due diligence documents after each art sale, according to the investigation.

Investigators told reporters that Baltser refused to cooperate and declared that he has no plans to return to the United States.
Asked if any laws were broken, investigators said that as a US citizen, Baltser must comply with US sanctions. Investigators said they are still “working through” potential criminal referrals to law enforcement.
“Baltzer can confirm that neither it nor Gregory Baltser has ever, at any time, represented or transacted in any way with Boris or Arkady Rotenberg,” David Vicinanzo, a lawyer at Nixon Peabody, said in a statement to CNN Business.
“Baltzer had urged the Subcommittee not to make unfair and untrustworthy allegations on the basis of information from unconfirmed sources, and is deeply disappointed that the Subcommittee has chosen to do just that,” the statement said.
The bipartisan investigation called for a series of changes, including: adding businesses that handle transactions involving high-end art to the Bank Secrecy Act; issuing comprehensive guidance from the Treasury Department’s Office of Foreign Asset Controls to auction houses and art dealers on how to avoid doing business with sanctioned individuals; and requiring Treasury to collect beneficial ownership information for companies formed or registered to do business in the United States.
“Given the intrinsic secrecy of the art industry,” the report concluded, “it is clear that change is needed in this multi-billion dollar industry.”