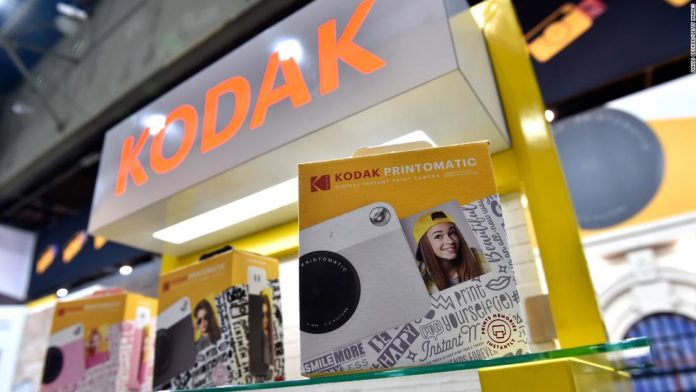 On Tuesday, President Donald Trump announced the company would receive a $765 million loan to launch Kodak Pharmaceuticals, which will produce generic active pharmaceutical ingredients to reduce America’s dependency on foreign drug makers.
The company’s shares have skyrocketed on the news. Following a more than 200% jump in Tuesday trading, the rally continued on Wednesday and the shares ended up 318%.
But the soaring performance wasn’t without hiccups: The New York Stock Exchange halted trading in the shares 20 times throughout Wednesday’s trading session as the stock soared, climbing more than 650% at its highest.
Kodak, once a giant producer of film and cameras before the digital era, pivoted to turn itself into a a materials and chemical company. It filed for bankruptcy in 2012 and emerged as a restructured business the following year.
The company already manufactures key materials for some pharmaceuticals, so its new mission is just an expansion of that capacity, Kodak CEO Jim Continenza told CNN’s Julia Chatterley on Wednesday. It will take around three to three and a half years to build out the new production capacity, he said.
The company will hire some 359 workers, most in New York state, and create approximately 1,200 indirect jobs, Continenza told Chatterley.
“We’re excited to bring those jobs back to New York,” he said.
Even though the company benefited from the Trump administration’s use of the DPA and Continenza praised New York Governor Andrew Cuomo multiple times during the interview, he said: “I’m not political, I’m a businessman, we run a company.”