Home World The UK is turning to the White House for inspiration on press... 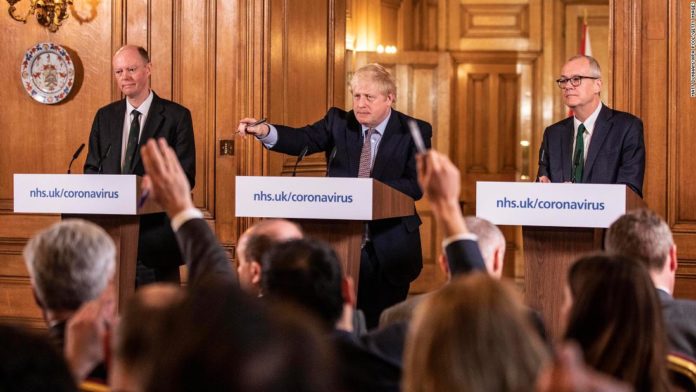 On Wednesday, the UK Prime Minister put up a new job listing: A spokesperson to front a new daily televised press briefing, much like the White House press secretary. The briefings, which are expected to start in October, are a major shakeup to the traditional off-camera twice-daily gaggles London journalists are used to.
“You will represent the government and the Prime Minister to an audience of millions on a daily basis, across the main broadcast channels and social media, and have the chance to influence and shape public opinion,” the job posting states.
During the height of the first wave of the UK coronavirus pandemic, daily news briefings from Downing Street attracted the type of TV ratings that would make President Donald Trump jealous.
Johnson wants to keep that going.
“We do think that people want direct engagement and want stuff from us and so we’re going to have a go at that,” Johnson told LBC radio in early July. “I will pop up from time to time, I have no doubt.”

But in Washington, where the daily briefings have been televised since 1995, those on both sides of the podium have a warning: Turning on the cameras will make Downing Street more like the stage at Shakespeare’s Globe, the famous Elizabethan theater just down the River Thames.
And for some, that’s a bad thing.
Mike McCurry, the Clinton White House Press Secretary who brought the briefings to television in 1995, is famously vocal about his regrets over letting networks air the daily briefings in real time, telling CNN Business they’ve turned into “a reality TV event.”
Now he thinks the briefing should be embargoed until its conclusion.
“This requires journalists to record the briefing, test the information against other sources, maybe extract comment from others, and then prepare reports that use what is truly newsworthy,” McCurry said.
That’s unlikely to happen in today’s livestreaming world. Joe Lockhart, who took over as White House press secretary after McCurry, told CNN Business he expects both sides in London will treat the exercise as theater.
“Downing Street is likely bringing in a TV presenter (for the spokesperson role) and I think reporters just by human nature, a lot of them will see this as a way to get on TV, getting attention,” Lockhart said. “It will not be a briefing per se but a performance.”
On the journalists’ side of the podium Caren Bohan, Washington editor of USA Today and a former White House Correspondents’ Association president, told CNN Business televising the Downing Street briefings will change the relationship between the press and the government. But she said it is “overdue.”
“Most public officials are likely to be more guarded on camera than they would be speaking to reporters without cameras. You are more likely to get ‘talking points’ and less candid responses,” Bohan said. “That said, the more access there is, the better it is for the press and the public.”
In London, the group of reporters who cover Downing Street are known as The Lobby and they participate in two briefings with the Prime Minister’s spokespeople every day. The briefings are off-camera, and the spokespeople are always only identified as “a government spokesperson”. Even audio recording is not allowed.
And while many journalists in London are open to the televised briefings, some are wary of their colleagues — some of whom are already “preening peacocks,” as one political correspondent for a British paper said -— being swept up in the theatrics and boosting their egos by trying to spar with government officials on national TV.
Former ITV anchor Alastair Stewart wrote in a column for The Spectator that this way at least, the public will be able to see and hear the questioner and respondent in full view.
“There is more merit in having a free and frank exchange between press and politicians, in the full glare of the TV lights, than in continuing with the semi-secretive pantomime of the lobby,” he wrote.
Others worry that turning the cameras on will actually reduce transparency. Thus far there have been scarce details on the exact format of the briefings and who will be allowed to participate.
In a joint statement to the media watchdog Press Gazette, The Daily Mirror’s Pippa Crerar, chair of the Parliamentary Press Gallery, and the Mail’s Jason Groves, chair of the Lobby said they don’t want to see the new briefings “used as an excuse to reduce transparency by, for example, reducing the number of daily briefings, limiting questions, those who can ask them, or our on-the-record access to ministers.”

Reporters should be ready for canned, made-for-TV soundbites from the government’s spokesperson, veteran Washington correspondents warned.
Ben Feller, a former chief White House correspondent for the Associated Press and now a partner at communications strategy firm Mercury, told CNN Business most reporters find the daily briefings with the press secretary useless for gathering new information.
But reporters should still “prepare appropriately, get to the point, don’t take punts for answers, follow up, and act as you normally would.”
As for the chosen spokesperson, they will likely become the second most recognizable person from the UK government, with the first being the Prime Minister.
According to several reports, Downing Street is specifically looking to bring in someone with broadcast journalism experience to fill the role. But Lockhart warned Downing Street not to “just hire a familiar face that can fake their way through it.”
The best person for the position, he said, marries “presentation, politics and policy together,” Lockhart said.
McCurry also advised that the spokesperson stay out of policy deliberations and be a “fly on the wall.”
“Taking an active role in decision-making induces some reluctance to those ‘on the other side’ to share information with you and you want always to get ‘the best pitch’,” he said.
Feller also warned that one of the first questions the spokesperson may face from the press is to define their purpose.
“Is their role to promote agenda of government and not answer anything else, or is their goal to do both -— promote agenda and be responsible and responsive to the press?” Feller said. “Whoever they hire should be ready to answer that question.”