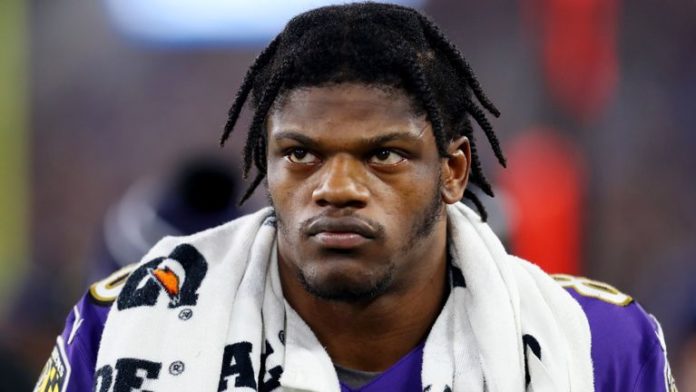 Lamar Jackson: “I don’t really focus on what he has going on, because I’ve still got to prove myself”

Reigning MVP Baltimore Ravens’ star Jackson is ranked No 1 in the NFL Network’s “Top 100 Players of 2020,” which is voted on exclusively by players.

At 23 he is the youngest player to ever come it at No 1 and first to make his debut in the top spot.

But after Super Bowl MVP Mahomes agreed to terms on what is reportedly the largest contract for an athlete in the history of sports, signing a 12-year deal that could end up being worth $503m, Jackson says the mega-contract for the Chiefs quarterback is not in his thinking at the moment.

I’ve got to focus on winning. I can’t put that on my mind. You’ve got to win first. If you’re not winning, then you won’t be worried about no $500m dollars either.

“I don’t really focus on what he has going on, because I’ve still got to prove myself. When that time comes, then we can negotiate after the Super Bowl. But until then, I’m focused on winning right now,” said Jackson.

“Right now, I’ve got to focus on winning. I can’t put that on my mind. You’ve got to win first. If you’re not winning, then you won’t be worried about no $500m dollars either.”

Jackson says his main focus is on helping the Ravens make it through to the playoffs after last season’s heartbreak of losing to the Tennessee Titans in the Divisional playoffs.

Jackson is also “still hoping” the Ravens can add wide receiver Antonio Brown to the roster ahead of the new season, despite his off-field problems.

“I just feel he’s a great. Well, around us, he was a great guy. You don’t really see anything going on, at all. He’s a cool, down-to-earth guy and he’s passionate about the sport of football. When he was working, you could tell, this man, he’s going to go 24/7. And after the workout, he still went and lifted,” Jackson said of the free agent.

“We go out there and go to throwing routes, after that, guys went and lifted some more. I’m like, ‘Man, this guy, there’s no quitting with him.’ That’s the type of guy we need in our locker room. And I feel like the locker room here is different from any other locker room. It’s like a brotherhood going on. It’s none of that outside noise; it’s strictly inside. We worry about each other; we worry about what we have going on. We want to win, and I can just tell in him that he wants to win. He wants to play ball.”