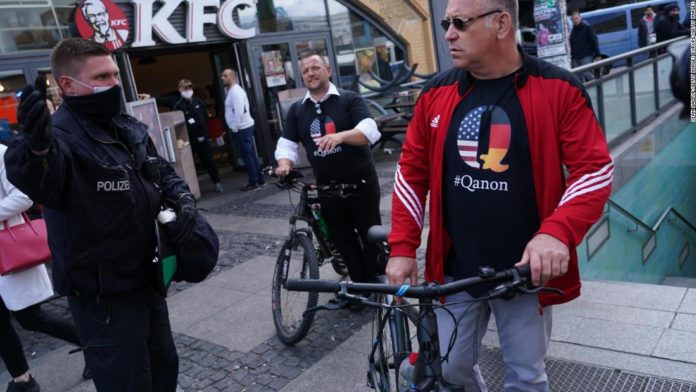 “Yes there was no basement in the particular pizza place, that is not the debunking that I want as a civilian, as a human that is going: ‘Hey, this bit, this bit is really f—king weird,'” he asked in a video clip, which has been viewed on Twitter more than half a million times. Williams’ representatives declined to comment to CNN.
The baseless PizzaGate claim emerged during the 2016 election. Later that same year, a gunman showed up and fired an AR-15 inside the pizzeria, saying he was trying to rescue non-existent child sex slaves.
The claim lies at the heart of QAnon, a wild conspiracy theory that believes politicians, A-list celebrities, and a “deep state” of bureaucrats promote child sex abuse. To QAnon adherents, US President Donald Trump is seen as a savior figure, secretly fighting to bring down this fictitious cabal of pedophiles.
Now a report by internet trust tool NewsGuard has found that the coronavirus pandemic is helping this distinctly US ideology gain a foothold in Europe.
In the report, NewsGuard notes an increase in QAnon social media groups and pages in April, as lockdowns sparked by the new virus left millions of people virtually confined to their homes.
Coronavirus conspiracies surged alongside the rise in infections.
Such claims acted as a “gateway drug” to QAnon, providing Europeans with the “perfect way into” the online cult, Chine Labbe, NewsGuard’s Europe Managing Editor, told CNN.

Conspiracy’s roots in US

QAnon began as a single conspiracy with an anonymous cryptic post on the online forum 4chan in 2017. The individual behind it — who followers would later call “Q” — made the false claim that Hillary Clinton was set to be arrested. There was no such arrest.
But similar posts pushing other claims of arrests and “deep state” action kept appearing on 4chan. It’s unclear who was behind the posts, or if the same person posted those that followed.
QAnon supporters have likened the initial posts, and subsequent ones, to Hansel and Gretel-like breadcrumbs, or “drops,” as they refer to them.
QAnon followers, whose online behavior has been likened by analysts to a virtual cult, disseminate the unfounded claims, amplifying them with doctored or out-of-context evidence posted on social media in an attempt to support the allegations.
Experts worry that the “dedication QAnon followers have to their beliefs also provides opportunity for foreign interference to use these narratives to their advantage,” Aoife Gallagher, an analyst on the Institute for Strategic Dialogue’s (ISD) Digital Research Unit, told CNN.
The movement has raised concerns about online harassment. Twitter banned more than 7,000 accounts, citing its policy of taking action on accounts with “the potential to lead to offline harm.”
But while QAnon has its roots in the US — supporting and disseminating baseless theories around mass shootings and elections — it has since turned into an amorphous ideology, appropriating conspiracies from other places that sit with its anti-elite message. ​
“It is such an easily translatable framework, because it is so meta,” Labbe said. “It is about the world elites having a Machiavellian plan, and every country in the world has elites.”
This ability to assimilate older hoaxes with newer conspiracies around the coronavirus outbreak has found QAnon “a wide group of followers” beyond the US among some New Agers and the conservative right, Gallagher told CNN.
“It is tangential to the far-right in the US, using anti-Semitic tropes and targeting the same people as the far-right, [but] as it spreads, we are also seeing it is appealing to [the] leftist anarchist side,” she said.
QAnon’s ability to evolve not only risks “seriously” undermining democracy, because of its damaging narrative about individuals and institutions, but also “undermines official information being released and could impede in the effort to get the virus under control,” Gallagher added.

QAnon has managed to incorporate local socio-political concerns from Germany, Italy, France and the UK into its anti-elite “deep state” narrative, according to NewsGuard’s report.
European QAnon groups have gained a large footprint online, with the report identifying “448,760 followers or members” in the social media groups it analyzed.
Memberships began to surge in late 2019 and early 2020, particularly once the coronavirus pandemic began to take hold​, according to NewsGuard.
One French YouTube channel featuring videos about QAnon has amassed 21,500 subscribers since its creation in April this year, according to the report. A UK QAnon Facebook group, created in the same month, has garnered more than 18,000 followers, the report says.
National political grievances have found a sounding board in QAnon.
German social media accounts portray Chancellor Angela Merkel “as a ‘deep state puppet’ who needs to be overthrown,” the report says.
In France, President Emmanuel Macron has been dismissed as “a pawn” in French language QAnon posts.
And Italian QAnon supporters have lauded the far-right former interior minister Matteo Salvini, but treated the country’s centrist Prime Minister Giuseppe Conte with scorn.
Meanwhile, debates are raging on British QAnon Facebook groups as to whether Prime Minister Boris Johnson has been “installed” by “Q” and is draining the “British swamp” alongside US President Donald Trump.
“On such discussion boards, Brexit and the British government’s decision to ban Huawei from the UK’s 5G networks are cited as evidence of Johnson’s allegiance to Q,” the report writes.
The report finds that QAnon is thriving in Germany. Local social media accounts linked to the ideology arrived on the scene as early as 2018, including what is now a 99,600-follower German language YouTube channel, and a Facebook group with 30,100 members.
German celebrities have also joined the conspiracy’s nexus.
Berlin-based vegan chef Attila Hildmann, who has posted on social media about his support for theories in the QAnon constellation, implored the US to “free” Germany in June 2020, the report wrote. His post, on the messaging app Telegram, falsely claimed that Merkel was working “together with Gates, the Zionists, transhumanists and communists,” to plan the “genocide of the Germans.”
In a statement to CNN, Hildmann said he isn’t a follower of “Q” but observes the movement “and supports it!” He added that “Germany is not a free country but is still occupied by the Americans and therefore only the great nation of America has the power to liberate the Germans from Merkel’s reign of terror!”
According to the NewsGuard report, singer Xavier Naidoo has been a “driving force” behind the conspiracy’s spread in Germany, routinely sharing QAnon content to his 84,000 subscribers on Telegram. CNN has seen at least five posts he has shared from QAnon groups on Telegram.
When asked to respond to allegations that Naidoo has fueled QAnon’s spread in Germany, a spokesperson for Naidoo said: “Xavier has nothing to do with QAnon.”
A separate analysis by Gallagher at ISD found that QAnon’s popularity in Germany coincides with Trump’s attacks on NATO and the European Union — a sentiment that appeals to anti-Atlanticism conspiracy groups.
“There is good appetite for that kind of rhetoric,” Gallagher said, adding that German QAnon groups on Telegram, “have seen huge increases in membership by the tens of thousands” since the start of 2020.
The theory remains on the fringes of European discourse, but analysts worry about adherents allying themselves with more mainstream movements.
According to NewsGuard’s report, Facebook groups supporting France’s Yellow Vest, or Gilet Jaune,movement ​ — a campaign that began protesting rising gas prices and has since morphed into a wider demonstration against Macron — “have been particularly interested in the Q narratives recently,” the report wrote.
One Yellow Vest group, which has 196,000 members, shared a QAnon video in July from a French QAnon site — that was created this May. “This shows how in some circles the two fights are becoming interconnected,” Labbe said.
Social media companies have taken aim at the conspiracy. Three sources familiar with Facebook’s work on misinformation told CNN in mid-July that the company plans to take action on QAnon. When contacted this week by CNN, Facebook declined to comment.
But the jury is out on whether it will stop the ideology’s spread. Many say the genie might already be out of the bottle.
Labbe argues that “censoring feeds conspiracies, as soon as you take down websites, they will find an alternative media platform.”
But the opposite is also true. “QAnon flourishes because it is a community where everyone can reinforce their beliefs,” Gallagher said. “Facebook groups are one of the main places” where QAnon thrives, she explained. “So it’ll be interesting to see the next move Facebook makes.”