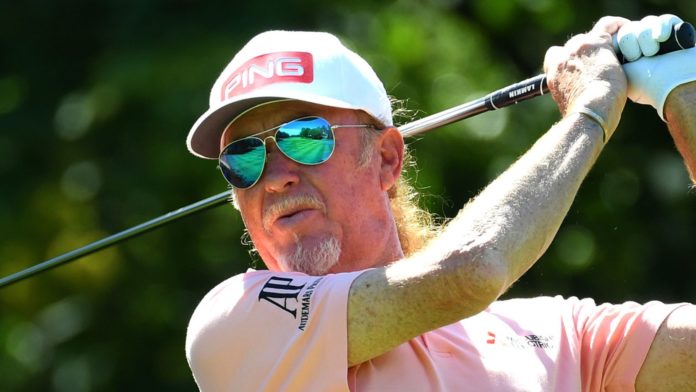 Miguel Angel Jimenez looked as fresh in his 707th appearance as his first as he ended a first day of exceptional scoring at the Hero Open just two shots off the lead.

Not content with adding another record to his impressive collection, surpassing Sam Torrance in the list of most European Tour appearances, Jimenez was determined to prove he is far from a ceremonial golfer and fired an eight-birdie 64 to earn a share of second.

The opening round at Forest of Arden was dominated by a trio of Spaniards, with Sebastian Garcia Rodriguez the best of the bunch on 10 under after a remarkable 62 in which he had only five pars and was seven under through eight holes to alert the “59 watch” brigade.

After a birdie at the second and an eagle at the next, Garcia Rodriguez made four straight and scorched to the turn in 29 blows, but his ambitions of breaking 60 were dented when he bogeyed the 10th, and briefly revived when he birdied 13 and 14.

But he blotted his card again at 16 only to finish eagle-birdie and assume the lead in the clubhouse, which ended up being two too good for the field as Pablo Larrazabal and Jimenez locked up a Spanish one-two-three at the top of the leaderboard.

“For me it is incredible,” said Garcia Rodriguez. “Today the key was the driver and the putts, it was just so close to the hole all the time. It’s amazing. It’s my first low, low score on the European Tour.”

Larrazabal carded nine birdies and just one bogey in his 64, and the stage was set for Jimenez to take to the tee for the 707th time in his career, and two opening pars did little to suggest what lay ahead for the evergreen 56-year-old.

Jimenez, one of only a handful of players who has experience Tour golf at Forest of Arden, birdied six of the next 10 holes and picked up further shots at 15 and 16 to move smoothly to eight under, and he was given a warm ovation by a number of players as he made his way to the final green.

Moments after a solid two-putt par at 18, Jimenez enjoyed a glass of red wine and a quick chat via video-link with Torrance before jogging off to the scoring office to sign his card and savour another slice of history in his storied European Tour career.

Welshman Oliver Farr bogeyed twice in three holes around the turn, but those blips were in between four front-nine birdies and five gains on the inward run as he returned a 65 to assume outright fourth ahead of the in-form Rasmus Hojgaard.

Another Dane in the spotlight was Thorbjorn Olesen, playing in his first top-tier tournament in over a year since his arrest following a turbulent flight home from last year’s WGC-FedEx St Jude Invitational, and the 2018 Ryder Cup star would have been pleased with a 70 having stumbled to the turn in 37.

David Drysdale, the Scot making his 500th Tour appearance this week, did not hit the heights of Jimenez as he signed for a one-over 73 blighted by a triple-bogey seven at the ninth, and he said: “My golf wasn’t quite where I’d have liked it to have been.

“It’s kind of strange, it means I’m getting old I guess. 500 events is tough to get your head round. I enjoyed it today, the weather’s great. Golf wasn’t so good, but it’s been fine.”

But on a day when the majority of the field were in red numbers, the highest-ranked player was a distance short of his best as Eddie Pepperell struggled to a 76 which featured only three birdies, with three bogeys and two double-bogey sixes leaving him with much work to do to be around for the weekend.