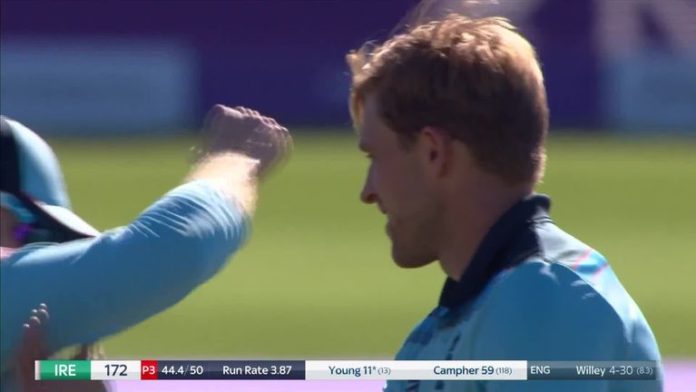 “The circumstances with Covid are probably why I have got my opportunity and you don’t know whether it is going to be the last one. For me it is about going out and enjoying every minute”

David Willey says he wondered if he would ever play for England again before taking five wickets on his ODI comeback against Ireland.

Willey was left out of England’s World-Cup winning squad last summer with Jofra Archer taking his spot and had not played a game for his country since July 2019 prior to Thursday’s ODI at The Ageas Bowl.

However, the left-armer returned in style with ODI-best figures of 5-30, including four wickets inside his first four overs, as he was named Man of the Match.

“I wasn’t sure if my opportunity would come again after the last 12 months,” said Willey, after England’s six-wicket victory in Southampton.

“I had been a part of that group for four years and to miss out at the 11th hour was obviously difficult but what the guys want on to achieve was phenomenal.

“I am enjoying playing cricket again – I absolutely love being out there and wearing the Three Lions again and it was a bonus it went well.”

Willey had been granted his opportunity with World Cup-winning seamers Archer, Chris Woakes and Mark Wood currently in England’s bio-secure red-ball bubble at Emirates Old Trafford as they prepare for the three-Test series against Pakistan from next Wednesday.

“The circumstances with Covid are probably why I have got my opportunity and you don’t know whether it is going to be the last one. For me it is about going out and enjoying every minute,” said the all-rounder.

He came in at the end with a bit more panache and vigour, bowling some bumpers. There was a bit more aggression. He obviously fell out of love a bit with the game so it’s great to see him back. He is a real competitor and when he gets the bit between his teeth that’s when you see the best of him.

“As it got close to that World Cup selection, you probably start thinking about it a little bit more rather than just going out and playing cricket.

“But that’s been and gone now. I am 30 and however many games I play I want to enjoy them.

“I play my best cricket when I’m enjoying it. That’s the most important thing for me at the minute and hopefully results keep coming.”

England captain Eoin Morgan said Willey – whose initial burst had reduced Ireland to 28-5 – was exceptional on the day, while Sky Cricket pundit Rob Key said the all-rounder should be in real contention for the back-to-back T20 World Cups in 2021 and 2022.

“I thought David had an outstanding day, I am delighted to have him back and firing,” Morgan said after England moved 1-0 up in the series and took 10 points in the World Cup Super League.

“Given the story of where he has been in the last year or so, I think it is a fantastic story and comeback. He has always shown a lot of heart and soul but the skill level here was exceptional.

Key added: “He did nothing wrong to be left out – he did everything he could and it was just that a very, very good bowler in Archer got ahead of him.

“You saw here why he is an asset, with the new ball in particular. There wasn’t a lot going on on that surface but he exploited [what there was] and if you are off in any way he is going to put the ball in the right area and expose it.

“I think he is such a handy cricketer for T20 cricket. He can do it at the top of the innings and bowl three overs at the top with one more at the end if you want.

“Don’t forget about his batting as well. In county cricket we have seen him score hundreds from No 3. He is so handy in T20 cricket, more so than 50-over cricket, I think.”

Watch the second ODI between England and Ireland live on Sky Sports Cricket from 1.30pm on Saturday.