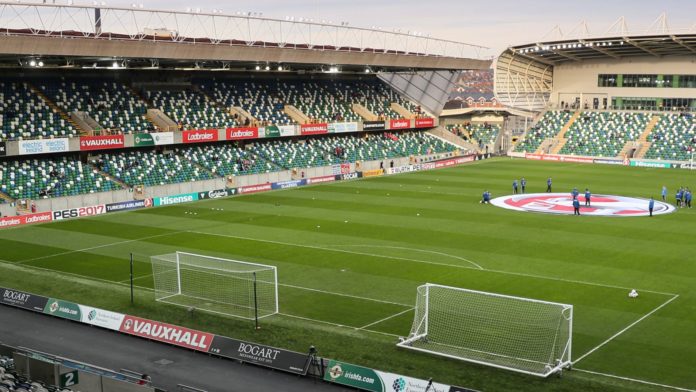 The first football match in the UK to be played in front of spectators since March takes place at Windsor Park on Friday when Glentoran face Ballymena United in the Irish Cup final.

The Irish Football Association announced last week that 500 fans will be allowed to attend its showpiece event at the 18,500-capacity stadium, with both clubs allocated 250 tickets.

“We’re a bit of a pioneer here in bringing some fans back into live sport,” said IFA chief executive Patrick Nelson.

“It’s up to us as the venue operator to make sure that everything is done safely and secure and we think that’s a good number to start off with.”

An official from the Sports Grounds Safety Authority will be in Belfast for the final, which was originally scheduled to be played in May, to pick up tips on how fans can safely sit at stadiums.

There will be temperature checks on entry for supporters and they will be restricted to sitting behind the goals.

The need for players to social distance means corporate lounges will be used to change in, and team talks will take place on the field.

“There’s a lot of restrictions,” said Nelson. “It is, as they say, the new normal for now. And we’ll see how it goes on Friday.”

“When the players and their families and people involved in the club receive their allocation, there aren’t many tickets left,” said McDermott.

“There will be people who have stood on the terraces for 40 years who will miss out, but hopefully nobody holds it against us.

Both Glentoran and Ballymena won their respective semi-finals after penalty shoot-outs on Monday night behind closed doors.

Glentoran progressed after being held 1-1 by Cliftonville, while Ballymena were also victorious having been locked at the same scoreline against Coleraine after extra time.