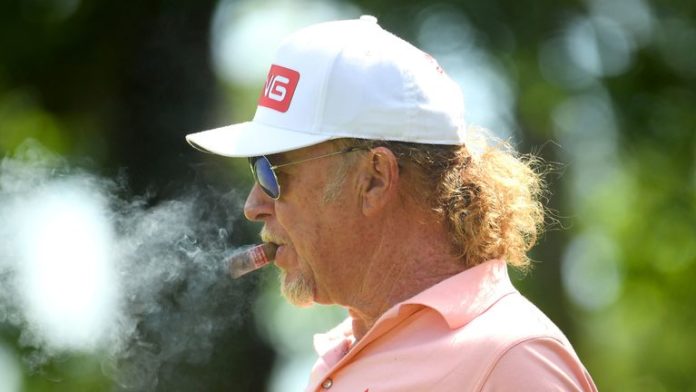 Miguel Angel Jimenez added another “wonderful day” to a “wonderful life” as he reflected on his historic 707th European Tour appearance at the Hero Open.

More than 37 years after his debut, Jimenez surpassed the record of Sam Torrance which has stood since the Scot played in his final event in 2010, and he celebrated in some style at Forest of Arden as he opened with an eight-birdie 64.

The 56-year-old completed a bogey-free opener to sit in a share of second place, two strokes behind young compatriot Sebastian Garcia Rodriguez, and Jimenez was honoured with rapturous applause from several appreciative players as he arrived at the 18th green.

After a solid two-putt par, Jimenez raised a glass of Rioja and received congratulations live from Torrance via videolink, and he expressed his immense pride in not only an excellent day’s work, but in his life and career overall.

“It’s been a wonderful day, eight under par,” said Jimenez, a 21-time winner on the European Tour. “Beautiful summer day and especially now on the 18th here with all my colleagues. Very emotional. I enjoy everything about my life here.

“This is a wonderful life, golf. You never remember the bad times. There are days you make 80, make a bad score, but you play golf. You can understand that you’re not going to be in the perfect mood and not make the perfect score every time. You can have a bad game, but not a bad day, that’s the difference.”

Jimenez was presented with a silver trophy to commemorate his achievement, and many stars of the game including Rory McIlroy, Justin Rose and Ian Poulter sent in video tributes to one of the most colourful characters in the game.

European Tour chief executive Keith Pelley said: “I would like to congratulate Miguel Angel on behalf of everybody at the European Tour for this monumental achievement.

“To play 707 times on the European Tour is a testament to his determination, his spectacular talent and an enduring passion for our game which is clear for all to see every time he tees it up. He is a hugely popular figure amongst our players and fans, and I know he will continue to entertain and inspire for many years to come.”

The only serious threat to Jimenez’s appearance record among current players would appear to be David Howell, who turned 45 last month and is playing in his 636th European Tour event this week.