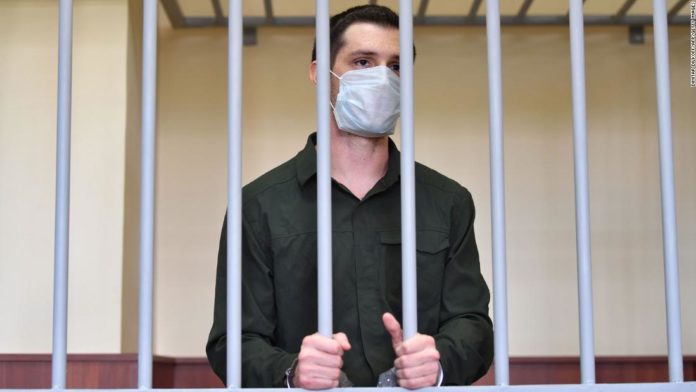 Reed, 29, was taken into custody last year after a night of heavy drinking during a visit to Russia to visit a longtime girlfriend Alina Tsybulnik, according to TASS and Reed’s family.
Police told state-run news agency RIA-Novosti that Reed was involved in an altercation with two women and a police unit that arrived at the scene following complaints of a disturbance and took him to a police station. Police alleged Reed resisted the arrest, attacked the driver, hit another policeman, caused the car to swerve by grabbing the wheel and created a hazardous situation on the road, RIA stated.
But Reed and his family asserted in a statement to CNN that the charges were false, and accused the Russian police of making false and conflicting statements and of suppressing evidence that could exonerate him.
“He has no memory of the evening past drinking vodka and being asked to toast many times,” the statement published by Reed’s family said.
Tsybulnik, Reed’s girlfriend, also disputed the police account, according to TASS. “(The police) constantly change their story… in my opinion, Reed was too drunk to resist them,” Tsybulnik told TASS.
US Ambassador to Russia John Sullivan called the criminal proceeding against Reed a “theater of the absurd” in a statement.
“This conviction, and a sentence of nine years, for an alleged crime that so obviously did not occur, is ridiculous,” Sullivan said. “I cannot even say ‘miscarriage of justice’ because clearly ‘justice’ was not even considered. This was theater of the absurd.”
Senior Russian officials did not immediately respond to Sullivan’s criticism.
Reed is one of several American citizens convicted in Russia in recent years on charges that their families and in some cases the US government have said are groundless.
In June, former US Marine Paul Whelan was convicted of espionage and sentenced to 16 years in prison by a Moscow court, concluding a months-long case that put additional strain to already complicated US-Russian relations. The Trump administration has condemned the charges against Whelan.
Whelan’s lawyer has speculated publicly that his sentencing will be used as leverage by the Kremlin to arrange a prisoner swap for two Russians in US custody, Viktor Bout and Konstantin Yaroshenko.
The Foreign Ministry later called ongoing speculation about a swap to be “rumors.” But last year the ministry raised the possibility that Yaroshenko — who was convicted of drug smuggling in 2011 and sentenced to 20 years in prison — could be returned “in exchange for any American national” held in Russia.
Yaroshenko is serving his sentence at the Federal Correctional Institution in Danbury, Connecticut. Bout, a Russian arms dealer dubbed the “Merchant of Death” who was sentenced to 25 years in US federal prison in 2012, has also been mentioned in Russian and international media reports about a potential swap.