Home Culture BAFTA TV awards to give viewers a glimpse of stars in their... 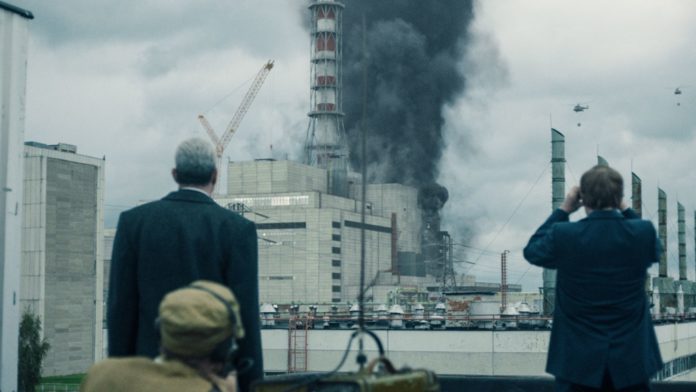 They might not be getting the fancy red carpet treatment, but the stars of our favourite shows will still be out in force – albeit virtually – for the BAFTA TV awards this evening.

Bookshelves crammed with weighty tomes? A casual display of awards from previous years and shows? Messy kitchens and impromptu visits from kids and pets? This year, viewers will get to see the BAFTA nominees in their natural habitats.

After picking up a whopping seven prizes earlier this month at the organisation’s craft awards, celebrating technical achievement, HBO/Sky Atlantic’s Chernobyl is one of the favourites for more big wins tonight.

Telling the story of the nuclear disaster at the Ukraine plant on 26 April 1986, the five-part series’ ensemble cast includes Jared Harris and Stellan Skarsgard, who are nominated for leading actor and supporting actor respectively.

It is also up for best mini-series, bagging three nominations in total; wins at the BAFTAs would follow huge success at last year’s Emmys, where it picked up 19 awards.

Director Johan Renck told Sky News that everyone involved was “pretty stunned by the reception”, but that “whether it has to do with serendipity or zeitgeist or timing, right now at this time, people wanted something of this nature”.

Other favourites include Netflix royal saga The Crown and Phoebe Waller-Bridge comedy Fleabag, which are both also up for several prizes.

The Crown is in the running for best drama series, supporting actor (Josh O’Connor) and supporting actress (Helena Bonham Carter); somewhat controversially, Olivia Colman missed out on a place in the leading actress shortlist for her portrayal of the Queen in the show, despite picking up a Golden Globe earlier in the year and a nomination for the upcoming Emmys in the US.

Fleabag is on the shortlist for best scripted comedy, while Waller-Bridge and her on-screen sister Sian Clifford are both in the running for the best female performance in a comedy programme prize. The BBC show is also up for a new, public-voted gong, the must-see moment, for its famous “hot priest” confessional scene.

Other shows in the running for awards include Shane Meadows’ gritty drama The Virtues, thriller Giri/Haji and Netflix comedy Sex Education.

In the news category, Sky News’ coverage of the Hong Kong protests will go up against Emily Maitlis’ infamous interview with Prince Andrew over the Jeffrey Epstein scandal, the ITV coverage of election night and a Victoria Derbyshire special on knife crime.

And there was a bit of upset in the soap and continuing drama category, with EastEnders left off the shortlist; Coronation Street and Emmerdale made the cut, along with medical dramas Casualty and Holby City.

The TV BAFTAs ceremony was originally due to take place on 17 May, but was postponed because of the coronavirus crisis.

Tonight’s event will take place as a closed studio, socially-distanced show, with nominees accepting their awards virtually – wifi permitting – and will be broadcast on BBC One from 7pm.

Richard Ayoade will host the show, with Hollywood star Idris Elba receiving the special award – one of BAFTA’s highest accolades – for his creative contribution to television and work promoting diversity and new talent in the industry.

But with no red carpet, will the stars still be dressing up?

“Dressing gown and a cup of coffee,” Chernobyl nominee Harris said at a Q&A ahead of the awards, but Jasmine Jobson, nominated for best supporting actress nominee for Top Boy, plans to make an effort.

“Just because I’m not going to be on a red carpet does not mean that I cannot dress up,” she said.

Whether the stars turn out in fancy frocks or pyjamas, this year’s TV BAFTAs will certainly be one to remember.

Here are all the nominees in full

Male performance in a comedy programme

Female performance in a comedy programme

Must-see moment (voted for by the public)