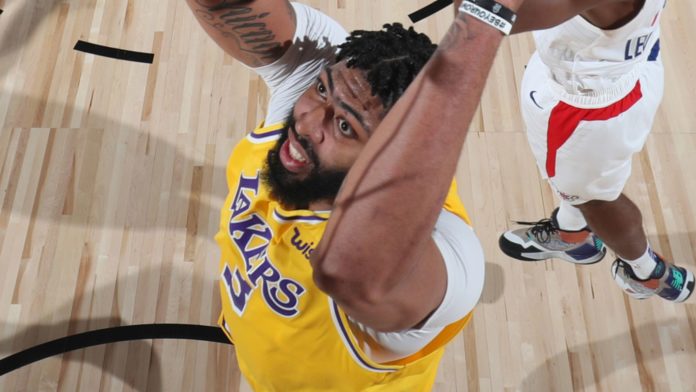 LeBron James followed his own miss and made the winning shot with 12.8 seconds left as the Los Angeles Lakers earned a 103-101 victory over the LA Clippers on Thursday.

LeBron James followed his own miss and made the winning shot with 12.8 seconds left as the Los Angeles Lakers earned a 103-101 victory over the LA Clippers on Thursday in the restart of the NBA season at the ESPN Wide World of Sports Complex near Orlando.

Anthony Davis scored 34 points and grabbed eight rebounds for the Lakers while James – who struggled on 6-of-19 shooting – finished with 16 points, 11 rebounds and seven assists.

Kyle Kuzma added 16 points for the first-place Lakers (50-14), who increased their lead to six-and-a-half games over the second-place Clippers (44-21) in the Western Conference standings.

Paul George had 30 points for the Clippers, but he missed a three-point attempt at the final buzzer. Kawhi Leonard finished with 28 points, Patrick Beverley added 12 points and Reggie Jackson added 10.

The Clippers played without their top reserves, guard Lou Williams, who is in quarantine after leaving the NBA’s central Florida bubble, and forward Montrezl Harrell, who left the facility on July 17 for an emergency family matter.

The Clippers wiped out a two-point half-time deficit with a 12-3 surge to open the third quarter for a 66-55 advantage. However, consecutive three-pointers by Davis put the Lakers up 72-71 with 1:41 remaining the period.

The Clippers took a 77-76 lead heading in the fourth quarter.

Both teams showed rust after more than four months of competitive play. The Clippers committed 22 turnovers compared to 16 for the Lakers. The Lakers prevailed despite shooting 39 per cent from the floor to 43.2 percent for the Clippers.

Rudy Gobert broke a tie by making two free throws with 6.9 seconds left as the Utah Jazz defeated the New Orleans Pelicans 106-104 in the first game of the restart to the NBA season.

The lead held up when Brandon Ingram missed a three-pointer with one second left, completing a fourth quarter in which the Jazz outscored the Pelicans 27-17.

Before the game, all players, coaches and staff members of the teams, along with all officials, kneeled during the national anthem. Players wore shirts reading ‘Black Lives Matter’, which was also printed on the court. Many locked arms with those next to them, while some raised fists in the air.

Jordan Clarkson came off the bench to lead Utah with 23 points. Mike Conley and Donovan Mitchell added 20 each, Gobert had 14 points and 12 rebounds, Joe Ingles scored 13 and Royce O’Neale had 12.

Ingram led New Orleans with 23 points. JJ Redick scored 21, Jrue Holiday had 20, Zion Williamson 13 and Josh Hart 10. Williamson played 15 minutes as he works his way back to full fitness after being quarantined following a trip out of the “bubble” due to a family situation.

The Jazz trailed for most of the game but pulled within two points on a lay-up by Conley early in the fourth quarter.

Ingram made a basket and E’Twaun Moore hit a three-pointer to increase the Pelicans’ edge to 96-89. Then New Orleans went cold. Clarkson made a three-pointer and assisted on a lay-up by Gobert.

After Ingram made a technical free throw, O’Neale and Mitchell made baskets, and Utah held a 98-97 lead with four minutes remaining.

Following an exchange of baskets, Redick made a three-pointer that tied the score with 1:02 left. Mitchell broke the tie by sinking two free throws, but Ingram answered with two free throws with 32 seconds remaining before Gobert made the game-winners.