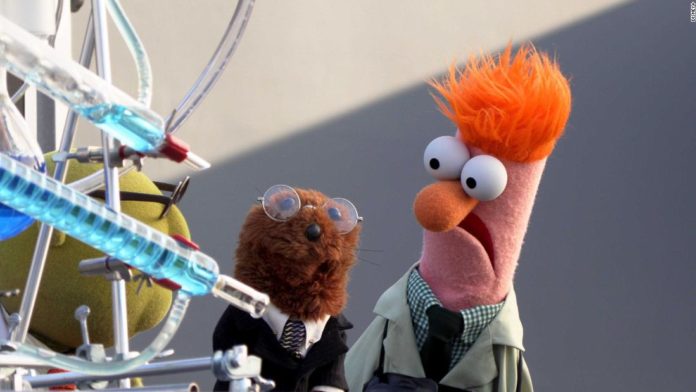 After movies in 2011 and 2014, the Muppets hit primetime with what was presented as a backstage version of the gang, using a faux documentary approach a la “The Office.” “Muppets Now” plays off that idea, billing its six-episode run as “unscripted,” depicting the characters assembling videos for a new streaming series.
Get past that 21st-century conceit, however, and there’s not much difference between the new Muppets and the vintage 1970s ones, other than the identifiably new voices — with Matt Vogel replacing Steve Whitmire, who was fired, as Kermit the Frog — and the flesh-and-blood talent (Taye Diggs, Linda Cardellini and Danny Trejo among them) enlisted to join in the nonsense.
One advantage the Muppets have is that they’re such an institution, people seem to welcome the opportunity to drop by, as evidenced by the aforementioned celebrities, or Kermit’s frequently interrupted interview with RuPaul.
The episodes previewed feature several recurring bits, some stronger than others. There’s a cooking competition involving the Swedish Chef against actual chefs, ridiculous experiments with Dr. Bunsen Honeydew and Beaker (accompanied by warnings from legal), and Miss Piggy’s regular “Lifestyle” segments. Of course, she’s constantly irritated that the graphics people keep leaving the “le” off the title, adding an appropriately porcine twist.
The broad physical gags cater to a family audience, with perhaps the weakest, drawn-out segment being a sort-of game show hosted by Pepe the King Prawn. (The closing credits including thank-yous to those who stayed quiet at home while the project was being made, a nod to production in the Covid-19 age.)
Basically, “Muppets Now” fits nicely in the filler bin of the streaming business model — the kind of show that would motivate relatively few people to subscribe, but given that it’s a recognizable commodity, you might watch if you’re getting Disney+ already.
Granted, that’s hardly a ringing endorsement, but on the bright side, it’s more enthusiastic than any review the gang would receive from Statler and Waldorf.
“Muppets Now” premieres July 31 on Disney+.