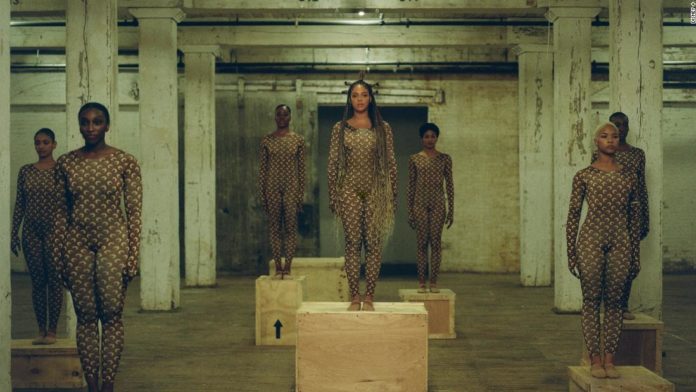 But she has outdone herself in her latest love letter to Blackness, at a time when that celebration is not only necessary but demanded.
The singer’s visual album “Black Is King,” which dropped Friday on Disney +, is everything her devout fan base, known as “The Beyhive,” wanted and more.
And while her last solo visual album, 2016’s “Lemonade,” cast its gaze on the Black experience in America, Beyoncé ventures to the motherland in her latest project and makes an even bigger statement about identity and history.
Filmed as a companion to her 2019 “The Lion King: The Gift” soundtrack, “Black Is King” comes amid an increased cultural focus on the Black experience and the treatment of people of the African diaspora, most specifically African Americans.
The singer touched on the timeliness — and timelessness — of her latest project in a recent Instagram post.
“The events of 2020 have made the film’s vision and message even more relevant, as people across the world embark on a historic journey,” she wrote. “We are all in search of safety and light. Many of us want change. I believe that when Black people tell our own stories, we can shift the axis of the world and tell our REAL history of generational wealth and richness of soul that are not told in our history books.”
Beyoncé collaborates with African artists on the album’s songs, including Nigerian singer-songwriter Tiwa Savage and Ghanaian singer-songwriter Shatta Wale.
Africa is a continent, not a country, and Bey reminds us of that multi-faceted nature throughout the short film, sometimes using herself as representation.
There is Beyoncé the mother (daughter Blue Ivy makes multiple appearances), Beyoncé the vixen, Beyoncé the wife, and, always, Beyoncé the boss.
Lush nature imagery gives way to inner-city scenes, as well as a palatial estate where servants wait on the singer and her rapper/mogul husband, Jay-Z.
The majesty of Queen Bey, along with the dance scenes, poetic voiceovers and guest appearances by Kelly Rowland, Lupita N’yongo, Pharrell Williams, Naomi Campbell and more illustrate the vast richness of Black artistry.
But Beyoncé gives us so much more by presenting Blackness as special, spectacular and a resilient reflection of the universal human experience.
“With this visual album, I wanted to present elements of Black history and African tradition, with a modern twist and a universal message, and what it truly means to find your self-identity and build a legacy,” she wrote on Instagram. “I spent a lot of time exploring and absorbing the lessons of past generations and the rich history of different African customs.”
The assumption might be that Beyoncé came to this via her role voicing the character Nayla in the 2019 photo realistic remake of Disney’s classic film, “The Lion King,” but that would be wrong.
True fans remember how she sought out Mozambican dance troupe Tofo Tofo to teach her their moves and appear in the music video for her 2011 single, “Run the World (Girls).”
Beyoncé has always embraced Blackness.
She did so with the imagery in “Lemonade,” stirred controversy with her Black Panther like uniformed dancers at the Super Bowl in 2016 and with her celebration of historically Black colleges and universities as Coachella headliner in 2018.
Using Disney, a brand that for years has been associated with beautiful White princesses and fairy tales, Beyoncé once again reminds the world of Black greatness in “Black Is King.”