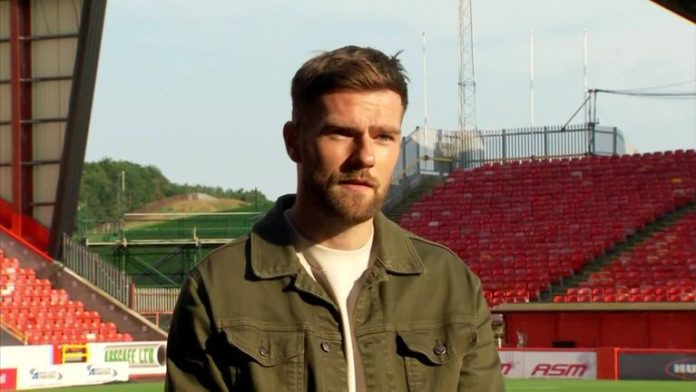 Team news, stats and predictions for the opening round of the Scottish Premiership, as Celtic start their title defence live on Sky Sports.

Aberdeen face a crisis up front with last season’s top scorer Sam Cosgrove and his understudy Curtis Main both ruled out of their Scottish Premiership curtain-raiser with Rangers at Pittodrie.

Cosgrove faces a 10-week lay-off with a knee injury while Main has picked up a thigh strain. Ash Taylor (hamstring) and Shay Logan (calf) are back in contention, however.

Jonny Hayes could make his second debut for the club against Steven Gerrard’s team after returning from a spell at Celtic.

Alfredo Morelos will travel to Aberdeen with the Rangers squad despite continued speculation over the striker’s future.

The Ibrox side have rebuffed an opening £13m offer from Lille amid reports the Colombian has agreed personal terms with the French giants.

His availability is all the more important to Steven Gerrard ahead of the Pittodrie clash given Jermain Defoe (hamstring) is out of action. Steven Davis (Achilles) is also injured but should be fit to face Bayer Leverkusen next week, while summer recruits Leon Balogun, Calvin Bassey and Jon McLaughlin are vying for a place.

Key stat: This will be the fourth time that Aberdeen and Rangers have met on the opening matchday of a Scottish top-flight season in the 21st century; the Dons have failed to win the previous three (D2 L1).

How to watch: Watch Aberdeen vs Rangers live on Sky Sports Football and Main Event from 11.30am; Kick-off 12.30pm. Follow the action with our dedicated live match blog including in-game clips, with free match highlights published on the Sky Sports website, app and YouTube channel later that evening.

Luke Bolton is in contention for his Dundee United debut in their Scottish Premiership return against St Johnstone.

The Manchester City winger joined the club on loan in midweek.

Skipper Mark Reynolds has brushed off a knock to hand Micky Mellon a fully fit squad for his first game in charge.

Conway joins Shaun Rooney, Isaac Olaofe and Danny McNamara as new faces at McDiarmid Park and will go straight into boss Callum Davidson’s squad for the trip to Tannadice.

Christian Doidge is among the Hibernian players missing from their Scottish Premiership opener against Kilmarnock at Easter Road.

The striker is back in training following a knee injury but is not ready to feature. Adam Jackson has also missed a chunk of pre-season training while Stevie Mallan has had some knee issues and is a doubt.

Ryan Porteous is set for his first appearance since aggravating a knee problem in January. Kevin Nisbet, Alex Gogic and Drey Wright could all make their debuts for Hibs.

Aaron Tshibola is added to the Kilmarnock squad after returning to the club on Friday.

New goalkeepers Danny Rogers and Jake Eastwood are vying for the number one position after also signing this week.

Key stat: Hibernian have only lost one of their last nine home games against Kilmarnock in the Scottish top-flight (W4 D4), and are unbeaten in five (W2 D3) since a 0-1 reverse in May 2014 under Terry Butcher.

St Mirren boss Jim Goodwin could hand debuts to his six new summer recruits when the Buddies kick off the new Scottish Premiership campaign at home to Livingston on Saturday.

Former Rangers goalkeeper Zak Alnwick has checked in alongside defenders Richard Tait, Joe Shaughnessy and Marcus Fraser and midfield pair Nathan Sheron and Isak Thorvaldsson, and all are in contention to face Livi.

Sam Foley is also in the squad following hernia surgery but Kyle Magennis and Ryan Flynn remain out with long-term knee injuries.

Livingston have a number of players looking to make their competitive debuts for the club.

Alan Forrest, Jack Fitzwater, Matej Poplatnik, Salim Kouider-Aissa and Max Stryjek have all signed this summer and could feature.

Key stat: Livingston haven’t won their opening match of a Scottish Premiership season since 2004 (3-0 v Inverness Caledonian Thistle), losing two and drawing one of three such matches in the top-flight since.

Celtic manager Neil Lennon welcomes Vasilis Barkas into his squad after the goalkeeper joined on a four-year deal from AEK Athens on Thursday. Winger Mikey Johnston will have surgery on a calf problem which will keep him out for four to six weeks.

Hamilton boss Brian Rice will assess his squad before the trip to Parkhead. New signings Ross Callachan, Callum Smith, Charlie Trafford and Tunde Owolabi are all available to make their debuts. Club captain Brian Easton is out until October following ankle surgery and Will Collar until September with shin problems, while David Templeton is back
training following a back problem but the game comes too soon.

Key stat: Celtic have won each of their last 12 consecutive league meetings with Hamilton since a 1-1 draw in February 2016 under Ronny Deila.

How to watch: Watch Celtic vs Hamilton live on Sky Sports Football and Main Event from 3.30pm (from 4pm on Main Event); Kick-off 4.30pm. Follow the action with our dedicated live match blog including in-game clips, with free match highlights published on the Sky Sports website, app and YouTube channel later that evening.

Stuart Kettlewell is confident Ross County will have completed the signing of Celtic goalkeeper Ross Doohan in time for Monday night’s Scottish Premiership opener with Motherwell.

The 22-year-old featured for the Staggies in a friendly clash with his parent club last Sunday but had to wait for Neil Lennon to complete the signing of Vasilis Barkas before he could make his one-year loan move north to Dingwall.

The deal should go through before Well, but long-term absentees Tom Grivosti and Joe Chalmers remain on the casualty list. Midfielder Chalmers has been sidelined with an ankle injury since December, while defender Grivosti last featured in October before he suffered a foot problem.

Motherwell could hand debuts to Callum Lang, Nathan McGinley, Ricki Lamie and Jordan White, while Jake Hastie is competing for a return to the team after rejoining the club on loan from Rangers.

Goalkeeper Trevor Carson is set to make his first competitive appearance since Northern Ireland’s Nations League clash with Austria in November 2018, after which he suffered deep vein thrombosis.

Long-term absentees Jake Carroll and Charles Dunne will not be back before September.

Key stat: This will be Ross County’s first league match under the sole management of Stuart Kettlewell; the Staggies played 40 Scottish Premiership games with Kettlewell in joint-charge with Steven Ferguson, winning eight, drawing 13 and losing 19.

How to watch: Watch Ross County vs Motherwell live on Sky Sports Football and Main Event from 7pm; Kick-off 7.45pm. Follow the action with our dedicated live match blog including in-game clips, with free match highlights published on the Sky Sports website, app and YouTube channel later that evening.