Home Culture MLB says doubleheader games will be 7 innings each 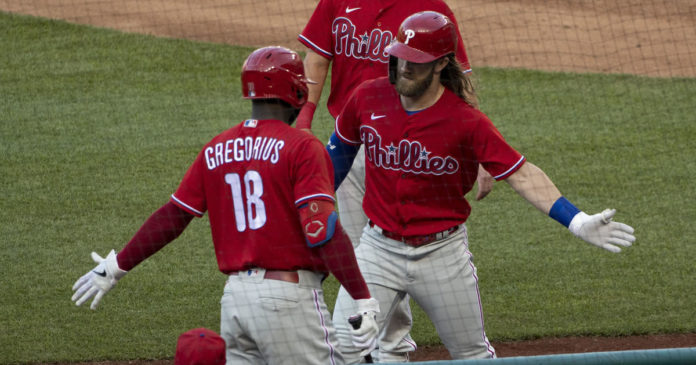 Major League Baseball and the player’s union announced Friday that all games played as doubleheaders during the 2020 regular season will now be seven innings each. The announcement comes as multiple games have been postponed due to players and staffers testing positive for the coronavirus.

“Given the frequency of doubleheaders, the effects of doubleheaders on rosters, and the need to reschedule games due to dynamic circumstances, both the Clubs and the Players have determined that this step promotes player health and safety,” the league and the union said in a joint statement.

The change, which will begin this Saturday, was unanimously endorsed by the MLB’s Competition Committee and Playing Rules Committee, the statement said.

The announcement comes after a difficult week for the league. Multiple games were postponed due to coronavirus cases among players and staff.

On Tuesday, the league postponed all Miami Marlins games through Sunday after more than a dozen players and staff tested positive for the virus. Two days later, the league postponed the series between the Philadelphia Phillies — who had played against the Marlins the week prior — and the Toronto Blue Jays, after two Phillies staffers tested positive.

Earlier Friday, the league postponed a game between the St. Louis Cardinals and the Milwaukee Brewers after two members of the Cardinals tested positive.

Before the doubleheader rule was announced, players and staff weighed in on the potential change.

“I like nine and nine, personally,” New York Yankees reliever Adam Ottavino said Wednesday, according to The Associated Press. “I don’t want to be marginalized out of the game. Once we go seven-inning games, slippery slope there.”

Los Angeles Angels manager Joe Maddon was more receptive to the idea. “If the doubleheaders were to pile up for whatever reason, I would have it like in a contingency plan,” he said, according to the AP.

“You just accelerate what you’re doing, just like we’re doing with the season,” he added. “So I get it from the perspective of expediency, if it’s necessary. … I’m in for anything right now. I’m not going to speak badly of any kind of suggestion right now that people believe is going to help us get through the season, get through the playoffs and conclude them.”

The league and the union released updated testing results on Friday, writing in a statement that out of 11,895 samples collected and tested in the past week, 29 were positive. Of that 29, 20 came from players and 9 came from staff.

Twenty-one of the positive results came from a single club, according to the statement. Among the other 29 clubs, two players, one alternate site player and five staff members tested positive.