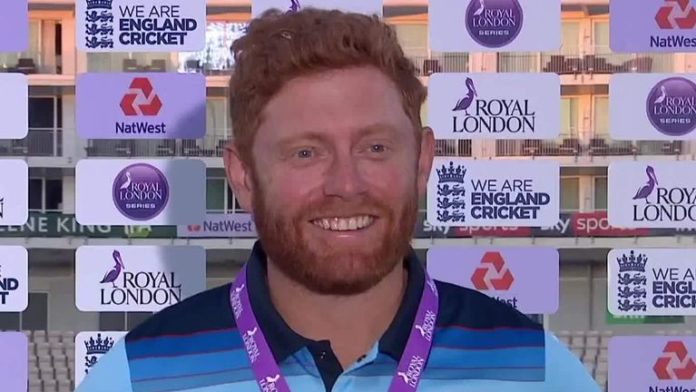 Jonny Bairstow set his sights on helping England to defend the World Cup in three years’ time after his record-equalling half-century sealed an ODI series victory against Ireland.

The 30-year-old smashed 82 from 41 balls at the top of the order to set up his side’s four-wicket victory at the Ageas Bowl, reaching 50 in just 21 deliveries – the joint-quickest by an Englishman in ODI cricket.

Bairstow also passed the milestone of 3,000 international runs in 50-over cricket, joining team-mate and fellow Yorkshireman Joe Root as the fifth fastest to do so in world cricket.

But the wicketkeeper-batsman is already targeting further landmarks and a place in the England side for the next 50-over World Cup, due to take place in 2023.

“I’m really proud of that,” Bairstow told Sky Sports. “It’s been a testing journey at times but to have reached that landmark – and hopefully there’s many more – means a lot now.

“We’re striving to keep pushing those boundaries forward to 2023. That’s my next bit – I want to be there in 2023 and really pushing and see if we can retain it.

“I’m enjoying batting at the top of the order and the partnership with Jason (Roy) has gone well. Naturally there’s things I want to work on, that comes with time but at the moment I’m happy with the way I’m striking the ball.

“I’ve had a bit of a lay-off and to get runs in the warm-up game, then back it up in the ODIs is really pleasing.”

Bairstow’s blistering knock laid the foundations for England’s success, although they did endure a significant middle-order wobble following his dismissal by Josh Little.

Captain Eoin Morgan and Moeen Ali both departed for ducks as the home side slumped to 136-6 in pursuit of Ireland’s 212-9 before Sam Billings and David Willey saw them home with an unbroken partnership of 79.

Sky Sports analyst Rob Key reckons Bairstow’s effort at the Ageas Bowl highlighted his credentials as one of the best limited-overs openers in world cricket.

“The pitch, when he was batting, looked an absolute belter,” said Key. “There was a bit of pace in it and Jonny Bairstow smashed it everywhere.

“He hit it on the up, he looked like he could pull, the odd bouncer was flying through and then there was a point when Eoin Morgan got out and Billings had only just got in – no-one else had got a run.

“He was just playing a different game to everyone else, bar Billings and Willey at the end. When he’s on song, there’s not many better to watch for pure ball-striking and the way he takes to opening bowlers.

“You certainly can’t call him a flat track bully – this wasn’t one of those. If you were picking a world XI for opening batsmen in 50-over cricket at the moment, it’d be hard to leave him out.”