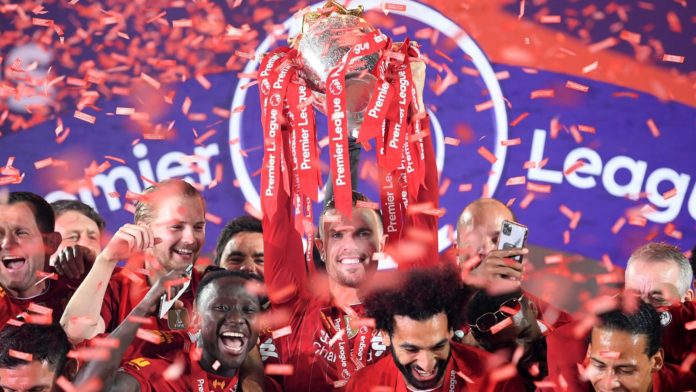 The 2020/21 Premier League season will start just six weeks after the previous one finished. Here’s what we know so far…

When does the 2020/21 Premier League season start?

The 29th campaign was originally due to begin on August 8 but coronavirus has impacted the football calendar; the new season will commence just six weeks after the 2019/20 one will have finished.

However, Manchester United, Manchester City, Chelsea and Wolves are expected to be given extra time off by the Premier League should they go into the latter stages of their respective European competitions.

The Premier League is likely to ring-fence a guaranteed 30 days off for players to recover, from the day after their final European game of this season.

When will the 2020/21 Premier League season finish?

Leeds are back in the Premier League after a 16-year absence, while West Brom sealed the second automatic promotion spot after a topsy-turvy final day of the Championship season.

One of Brentford, Fulham, Cardiff or Swansea will join them via the play-offs.

Norwich made an immediate return to the second tier, with Watford and Bournemouth relegated on the final day.

When will fans be allowed back?

The season will begin behind closed doors but some spectators could to return to venues on a socially-distanced basis from October 1.

Mass gatherings at sports grounds have been banned since March but the Prime Minister said in mid-July that the government were hopeful crowds could return after some test events in August.

Reports have suggested grounds may only initially be between 30 and 50 per cent full and attendance at sporting events for the foreseeable future will be subject to a number of strict conditions.

Clubs discussed bringing fans back to grounds at a Premier League meeting on July 24.

The Premier League is prepared to offer stadia for pre-season games that could act as test events in August or early September, with league chiefs keen to have fans back as quickly – but as safely – as possible.

What will be new next season?

The use of five substitutes next season has been approved by football’s lawmakers, the IFAB, though each competition will be free to decide whether or not to take up the new ruling.

Clubs discussed the idea at their final shareholders’ meeting before the end of the 2019/20 season but a vote is not expected to take place until the next AGM – when all 20 clubs have been confirmed for the new term – on August 6.

The 2019/20 Premier League season has only just finished but clubs are already showing off new kits.

PGMOL chief Mike Riley presented a VAR review to clubs in their July meeting and the Premier League is expected to hold talks with FIFA during the summer break. FIFA’s top officials, including Gianni Infantino, Pierluigi Collina and Arsene Wenger, have been critical of VAR’s inconsistent use in some competitions.

Meanwhile, plenty of clubs have released new strips for the forthcoming campaign and Nike has released its new ‘Flight’ ball – one they said addresses “inconsistent aerodynamics”.

When is the transfer window?

The window will run for 10 weeks this summer.

It opened on Monday July 27 and will close on Monday October 5 at 11pm.

Any other dates to mark in the diary?

The European competitions for 2019/20 are still to be concluded.

Champions League knockout games will be played in a 12-day condensed tournament in Lisbon in from August 12-23, with Manchester City and Chelsea still in the tournament. Next season’s group stage will start on October 20/21, 2020.

Wolves, Rangers and Manchester United will play their round-of-16 second legs in the Europa League on August 5/6, with a final-eight tournament due to take place across four venues in Germany from August 10-21. Next season’s group stage will start on October 20, 2020.

The Community Shield will take place at Wembley on Saturday August 29, the FA has confirmed. The traditional curtain-raiser for the new season will see Premier League champions Liverpool play Arsenal. The kick-off time for the game will be announced at a later date.

The match will be immediately followed by an international break from September 2 to 10.

The Premier League will continue to consult The FA and EFL regarding the scheduling of all domestic competitions.

Euro 2020 will now take place from June 11-July 11, 2021. The 12 original host cities have been confirmed as venues for the rescheduled tournament.