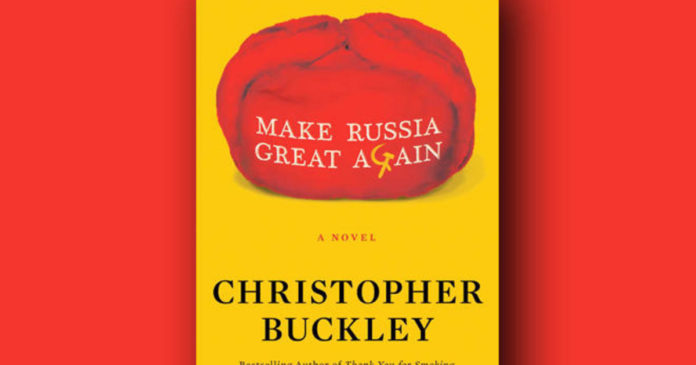 In “Make Russia Great Again” (Simon & Schuster), the latest satire from the bestselling author of “Thank You for Smoking,” Christopher Buckley writes a White House tell-all, featuring a thinly-disguised Trump administration whose chief of staff – a former Trump Resorts manager – is called upon to broker a matter of national security involving Russian elections. Yes, it’s fiction.

Read an excerpt from “Make Russia Great Again” below:

“How could you work for a man like that?”

“What were you thinking?”

All the time I get this, even in here, which frankly strikes me as a bit rich. Who knew inmates at federal correctional institutions had such keenly developed senses of moral superiority?

Let me say, at the outset I had no illusions when I agreed to serve as Donald Trump’s White House chief of staff. I did not seek the job, nor did I imagine, even for a moment, that it would be a “picnic,” a “walk in the park,” or some other metaphor for “wonderful, life-enhancing experience.” I certainly didn’t

imagine that it would culminate in having a mailing address consisting of an acronym and numbers recognizable only to the U.S. Postal Service.

Call me old-fashioned. My view is that when your president calls, you pick up the phone. My wife, Hetta, urged me – literally – not to pick up the phone when she saw “POTUS” on the caller ID.

“Hetta,” I said, “I can’t not take a call from the president of the United States.”

“Yes you can!” she hissed, sounding like an inverted Obama slogan. She remonstrated, as only Hetta can. But I picked up. Let history record that when the president called, Herbert K. Nutterman took the call.

The operator put me through to the Oval Office. I heard the familiar voice: “How’s my favorite Jew?”

Hetta was now shaking her head, making violent “No!” and “Hang up!” gestures. It’s distracting to have your wife do this when you are talking to the most powerful man on earth.

Mr. Trump often called me “My favorite Jew.” (When he was pleased with me, that is.) Sometimes just “My Jew.” I didn’t especially enjoy it, but I emphasize it was not anti-Semitism.

Mr. Trump is many things, but anti-Semitic is not one of them. It’s just his way. Many people who grow up in Queens, a borough of New York City, talk this way. Mr. Trump called one of the White House butlers of color “My favorite African American.” There was a navy steward in the White House Mess he always greeted with, “How’s my favorite Mexican today?”*

* The steward was actually Filipino, but he never corrected the president. To be honest, I don’t think Mr. Trump had any “favorite” Mexicans.

Hetta shook her head as if to say, “Oy!” (a Yiddish expression generally meaning “My husband is an idiot”). She stomped off to the kitchen. Soon there came a cacophony of Calphalon pots. Hetta copes

with stress by cooking. From one especially resonant thunk, I guessed that she had dropped the large soup pot. Perhaps on purpose. A great maker of soup is my Hetta. I hoped it was borscht, as I was very partial to Hetta’s borscht.