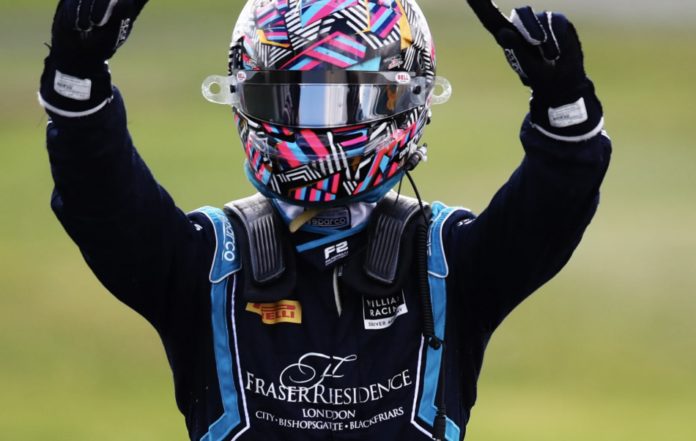 Dan Ticktum managed his hard tyres to perfection around Silverstone to survive a late charge from Christian Lundgaard, on fresher, faster medium Pirelli rubber, and bring home a historic first victory in FIA Formula 2 at his home circuit.

Starting from pole, the DAMS driver led for the entire race, but came under threat in the final lap after ART Grand Prix had made the brave decision to pit Lundgaard during a safety car period and change his heavily degraded hard compounds to mediums.

UNI-Virtuosi suffered a race to forget, with both of their drivers finishing outside of the points from strong positions. Ilott spun from second and was forced to retire midway through the race, before Zhou suffered a similar fate, spinning from fourth on the final lap. The Chinese driver was able to get going again, but he’d dropped to ninth.

A slow pitstop during the safety car period crushed any hope of a top eight finish for Championship leader Robert Shwartzman, who departs Round 4 without scoring a single point.

It wasn’t the first time that Ticktum had started on reverse grid pole this season, but unlike in Spielberg Round 2, he held onto the lead in the first lap. The DAMS driver got away speedily when the lights went out and dashed into the distance, ahead of Felipe Drugovich who was swallowed up by the pack. Lundgaard flung his ART Grand Prix machine off the line to fire into second at Turn 2, as Delétraz darted from fifth to third, dropping Drugovich to fourth. Ilott endured a tough start, with heavy wheelspin plunging him from third to sixth.

The UNI-Virtuosi racer was then at fault in a coming together with Yuki Tsunoda. Ilott touched the Carlin racer at the exit of Turn 3 and sent him into a spin. Ilott kept it together, but was served a 5s time penalty.

Guanyu Zhou had put in a sublime drive in the Feature Race on Saturday, with a late charge from eighth to second, and was on the metal again on Sunday. The UNI-Virtuosi racer picked up a double tow and DRS to thunder ahead of both Drugovich and Nikita Mazepin in one fell swoop for fifth.

Ilott knew the importance of the Sprint Race in his fight for the Championship and was giving it everything he had, well aware that his main title rival, Shwartzman, was out of the points in 11th but on the charge, having started from P14. He managed to build a 5s gap between himself and P6, before dashing ahead of Drugovich for P4. He eyed up Delétraz next and smoothly dispatched of the Charouz driver a few laps later. By Lap 14, he was in second, having gone around the outside of Lundgaard at Stowe. He knew he needed more though, as his 5s penalty would still drop him back down to P5.

n the end, he wouldn’t have to make the choice. Ilott lost the rear at the exit of Club and spun 180 degrees. He couldn’t get his Virtuosi going again and his race would end in retirement with the safety car brought out.

ART were amongst a number of teams to roll the dice and make the bold call to pit their driver’s during the SC period, changing heavily degraded hard compounds to the faster mediums.

This move dropped the Dane down to fifth behind Mazepin, with the front four opting against switching, Although Zhou radioed to tell his team they’d made the wrong decision.

Both PREMA’s pitted, but Shwartzman’s stop was uncharacteristically slow, and all of his early progress was undone, as he returned in 17th.

The Safety Car returned with two laps to go and Ticktum retained the lead at the restart, but Lundgaard instantly fired ahead of Mazepin for fourth. Zhou’s prediction that his team had made the wrong call was borne out, as his Renault Academy teammate eased ahead of him for the final podium spot on the fresher tyres.

Delétraz proved to be sterner competition, but he too was left ruing his team’s decision not to change rubber, as he lost grip and wobbled, which handed Lundgaard third. The delay in getting past the Charouz proved pivotal, as Lundgaard ran out of laps to get past Ticktum. The DAMS driver brought home a historic home victory ahead of the Dane with Delétraz third.

Zhou’s race ended in disaster as the UNI-Virtuosi driver spun on the last lap to hand Jehan Daruvala a career-high finish of fourth. The Carlin driver was followed by Mazepin, Drugovich, Nobuharu Matsushita and Jack Aitken.

Shwartzman retains the Championship lead with 81 points, eight ahead of Ilott. Lundgaard’s tally is up to 69 in third, 11 ahead of fourth place Mazepin, while Ticktum is two points behind in fifth. In the Teams’ Championship, UNI-Virtuosi are first on 124 points, two ahead of PREMA on 122, with ART third, Hitech Grand Prix fourth and DAMS fifth.

“It feels just as good – even without the fans – and I am over the moon to be honest. I haven’t crossed the line first in a while, so it feels good and it is a nice confidence boost. I don’t know what to say really, it was a very tough race all the way through.

“The first five laps in particular were pretty close, but then in the middle of the race I controlled it pretty well to be honest. The management of the tyres and the setup, with what we did with the aero balance was very good. At the end, if we had one less Safety Car lap, he (Christian Lundgaard) would have passed me. The last three laps were absolutely flat out, and I’m sure the blood pressure was pretty high.

“I am really happy, so a big thank you to the team, because it hasn’t been the easiest of starts, but we seem to have always made the best of not-so-ideal qualifying sessions, so to come away from this weekend with 20 odd points, or something like that, I am happy.

“This is the best track in the world, so I am happy that we’ll back next weekend.”

The F2 grid will remain in Great Britain with Round 5 taking place at Silverstone again in less than a week’s time. The Championship battle has been blown wide open with Ilott and Shwartzman’s inability to score in the Sprint Race, as Lundgaard, Ticktum, and Mazepin’s title bids all gained traction.