Home Culture Third Eye Blind and other bands are playing parking lots to give... 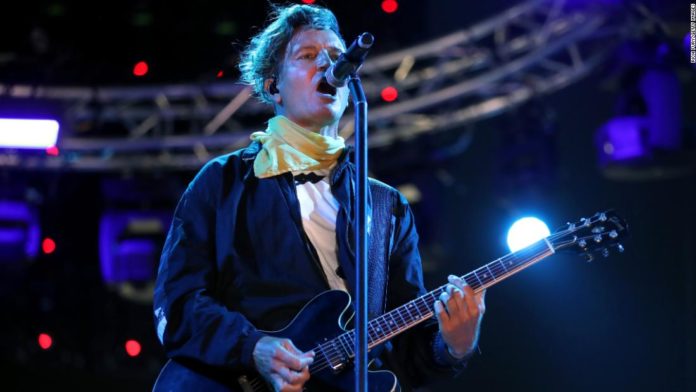 “You can just see it in my eyes,” Jenkins told CNN, referring to the apprehension he felt before the band took the stage last Saturday. “We had no sound check. We had not played in four months.”
Jenkins soon calmed down, connecting to the crowd as the band unleashed some of their hit songs, and as honking car horns replaced applause.
Welcome to the drive-in concert, a potential cure for heartsick music fans who yearn for live shows amid the coronavirus.
While livestream performances have gained traction during the pandemic, they are no substitute for the live experience, says concertgoer Holly Turner, who attended the Ventura event.
“We were supposed see Green Day, Weezer and Fall Out boy at Dodger Stadium tonight but that got postponed,” she said. “But this works, it’s what we need — live music.”
Turner and three friends took in the show from the bed of a pickup truck. They observed venue rules, wearing masks and maintaining a safe distance from other vehicles, even when the music moved them to hop off the truck and cheer in their parking space.
Concertgoers paid between $59 and $199 for parking spaces, depending on the distance from the stage. There was no limit on how many people could pack the vehicle.
The promoter estimated there was an average of four people per car for Saturday’s show.

Gross ticket sales for live entertainment shows in North America reached $1.6 billion by July 1, according to Pollstar, which tracks the industry. That’s a far cry from the $3.5 billion generated in the first six months of 2019.
When the pandemic shut down CBF productions, a Califronia-based music festival company, owner Vincenzo Giammanco pivoted. He used nearly $100,000 in federal paycheck protection funds to start “Concerts in Your Car” at the Ventura fairgrounds.
Giammanco says he employed more than 50 people for the Third Eye Blind show — from security guards to ticket takers to staff who sanitized outdoor toilets every 15 minutes.
“That does not even begin to count the people associated with the band and the positive economic effect on nearby businesses,” Giammanco said. “Then you had people buying food from restaurants because we don’t provide any. They (concertgoers) also stayed at hotels.”
Giammanco’s upcoming shows include Sublime with Rome, Rodney Atkins, Tracy Lawrence, a Selena tribute band and Jim Messina.
“I think we are just scratching the surface. This is not just a pop up,” Giammanco said.
The promoter says he wants to lure more popular bands to the venue by charging more per parking space, but he wants to keep the shows an affordable outlet for those struggling economically.
With other forms of mass gatherings still restricted, live entertainment promoters are increasingly committing to the drive-in concert concept — from Texas to Florida to Maine.

‘We need this right now’

In California, Giammanco seems to have a wheel up on the competition with a big fairgrounds parking lot and seaside location.
During the Third Eye Blind concert, an Amtrak passenger train made a stop just beyond the last row of parked cars.
“Hey, who is playing?” shouted the conductor. “Third Eye Blind, thought so. This is great!”
The train pulled away but the band kept playing on a cool, misty night, including “Jumper” and a cover of The Smiths’ “How Soon is Now?”
“We are definitely looking for a way to play and he (Giammanco) has found one that I think is safe, brings joy to people,” Jenkins said. “I think that’s a pretty hard combination to come up with so I am definitely rooting for him.”
Billy Vickery and his fiancé, Maria Martinez, watched the show from inside their orange Corvette.
“This is kick ass, just being here,” said Vickery. “We need this right now.”
Vickery’s only complaint was that his car lights intermittently turned on as he kept his radio tuned to the show with his engine off — and that annoyed nearby concert goers.
“We’re all trying to figure this out,” Vickery said as he laughed.