Home Culture Tanya Tucker, still out to change the world 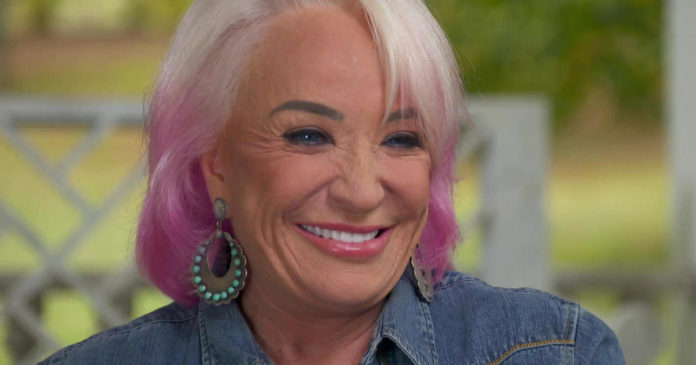 This story was originally broadcast on January 5, 2020.

On a cold and rainy December Sunday outside Northern Virginia’s Birchmere music hall, the sell-out crowd was lining up five hours before show time, some even earlier. “We’ve been here since 6:40 this morning, and we were first,” said one man.

And inside, Tanya Tucker was doing what she’s been doing since she was nine years old: getting ready to put on a show. After more than 50 years on stage, “Sunday Morning” met up with Tucker just after her nomination for not just one but four Grammys, more than any other country singer.

CBS News’ Bob Schieffer asked Tucker, “Has it sunk in yet?”

Tucker wound up winning not just one but two, for Best Country Song and Country Album.  They were her first Grammys after a career full of hits: since the ripe old age of 13 she’s had nearly two dozen Top 40 albums.

She became country music’s wild child, with a personal life that often grabbed more attention than her music. But her latest album, “While I’m Livin’,” has made her the critic’s darling, and it’s her music that’s making headlines again.

Schieffer said, “I got my marching orders here. I’m told, ‘Do not ask her how she likes this ‘comeback,’ ’cause you say it’s not a comeback. So, what is it?”

“Gosh, you know, I like the word relaunch,” Tucker said. “It wasn’t something that I had really planned out, and it really just kind of happened.”

“Well, isn’t that always the best way, when something just sort of happens?”

“Well, of course. You make plans, and God, He chuckles, you know, when you start makin’ plans!”

God only knows how oil field roughneck Jesse “Beau” Tucker recognized the potential in his youngest daughter, Tanya Denise, born 1958 in Seminole, Texas. But by age nine, she knew what she wanted. And her father was with her all the way.

“I was ready then, but they just weren’t ready for me,” she laughed. “‘Cause my dad always said, ‘You’re a nine-year-old girl. So that means you’re gonna have to put twice as much feelin’ in that song you’re singin’ than whoever recorded it … Because they’re not gonna believe a nine-year-old kid singing, ‘You ain’t woman enough to take my man.'”

In 1970, Tucker landed an audience with legendary Nashville producer Billy Sherrill, still hot after his success with Tammy Wynette’s “Stand By Your Man.” Sherrill wanted Tanya to record an age-appropriate song called “The Happiest Girl in the Whole USA.”

“Delta Dawn” is sung from the point of view of a middle-aged faded beauty. Producer Billy Sherrill heard Bette Midler, of all people, sing it on “The Tonight Show.” Yet somehow, he saw fit to offer it to Tucker.

Delta Dawn, what’s that flower you have on?
Could it be a faded rose from days gone by?
And did I hear you say he was a-meeting you here today
To take you to his mansion in the sky?

The lyrics seemed so improbable coming from a 13-year-old that the record label tried to keep Tanya’s age a secret. That didn’t last long, and as the hits rolled in, so did the money.  The little girl with the big girl’s voice took on some grown-up habits – drinking, drugs and romance.

Schieffer asked, “Do you think in any way, any of that hurt your career?”

“You know, it could have,” Tucker replied. “I mean, it probably did in some ways. But in a way, I don’t think you could be successful unless you’ve had a lotta failures, and I’ve had some.”

The same can be said for her love life. Though she was never married, she has raised her three children as a single mother, and made no apologies for it. Throughout the 1980s she carried on a public affair with Glen Campbell, who was more than two decades her senior.

“It was a kind of love that I think I probably found it too soon in life and was not mature enough at that time,” she said. “I think if we’d met later on, we would’ve made it, because it was love there.”

That’s just the sort of feeling you hear in her songs – the emotion that has always cut through the tabloid headlines. Maybe that’s why Tucker’s fans use one particular word to describe her.

“What you see is what you get,” said another fan.

And the more real she gets, the more they love her.

As it turns out, two of Tanya Tucker’s biggest fans would help compose this latest chapter in her life story. In 2018, musician and producer Shooter Jennings, the son of country giant Waylon Jennings, recruited superstar singer-songwriter Brandi Carlile to write new material for Tucker. But it was a song that Tucker had been trying to put on paper for decades that would, with Carlile’s help, bring the entire project into focus.

Bring my flowers now, while I’m livin’
I won’t need your love when I’m gone
Don’t spend time, tears, or money on my old breathless body
If your heart is in them flowers, bring ’em on

Schieffer said, “It kind of chokes me up just hearing you sing it, because it makes you think of the times that you’d wished you told somebody.”

“Absolutely,” she said. “It’s caused me to make a real effort to try to tell those that I love, that I do love them.

“And even some of those that I don’t, you know?” she laughed.

“Bring My Flowers Now” is the sound of a more reflective Tanya Tucker. At age 61, in Franklin, Tennessee, she surrounds herself with the people (and the animals) she loves.

“Yeah. Jenin’s gonna go in the box with me. And of course his daddy, who’s already in a little small box, he’ll go in there with me. We’ll have to have an extra big box though, because I have, well, I’ll have five dogs and two horses. We’re gonna be together forever!”

Tanya Tucker has packed a lot of living in her time on Earth. Since she was a little girl, her voice has been her ticket. And her voice has never had more to offer than it does today.

“My dad always told me, ‘You know how to change the world? You build your platform. You know, you build it ’til you can’t build it any higher, you can’t get no higher. And that’s when you can change the world, ’cause then people will listen to you. That’s the thing, I wanna not just be another female on this planet; I wanna change a lotta things.”

Schieffer said, “Well, I think you’re gonna change people when you remind them to bring the flowers now.”

“And that’s just another way of saying, ‘Show me you love me now; don’t hesitate.’ ‘Cause how wrong can you be?”