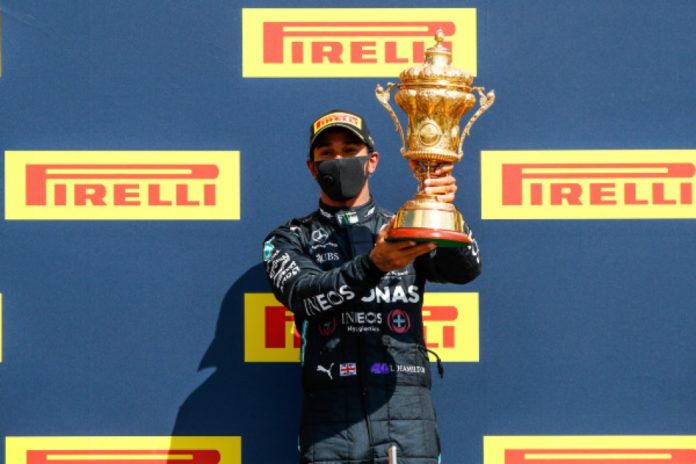 Lewis Hamilton took his third win in a row and his seventh British Grand Prix victory despite a puncture on the final lap that threatened to rob him of another triumph on home soil at Silverstone.

Mercedes had just seen Hamilton’s team-mate Valtteri Bottas drop out of the podium positions due to a deflation of his ageing front-left hard compound tyres when Hamilton’s also let go. And after a straightforward race in which his lead was never threatened, that put Hamilton under enormous pressure. The threat was compounded by the knowledge that Red Bull’s Max Verstappen was closing in fast having inherited second when Bottas dropped back.

However, the Dutchman had pitted for fresh tyres and an attempt at fastest lap in the wake of the Bottas incident and he was therefore unable to catch Hamilton before the Briton was able to limp across the line to claim his 87thcareer win. Verstappen took second ahead of Ferrari’s Charles Leclerc.

At the start Hamilton got away ahead of Bottas while Verstappen had a brief battle with Leclerc before taking a grip on third.

At the end of the opening lap Alex Albon in the second Red Bull tangled with Haas’ Kevin Magnussen at Club corner. Abon made contact with the Dane’s front wheel and Magnussen spun out, hitting the barriers hard, though he quickly emerged unscathed from the incident. Albon was able to continue but the incident hampered his race when he was later hit with a time penalty for causing the collision.

The safety car left that track at the end of lap five and on the re-start Hamilton retained his lead ahead of Bottas and Verstappen. Behind the top three Leclerc was now fourth ahead of McLaren’s Carlos Sainz, Renault’s Daniel Ricciardo and the second McLaren of Lando Norris.

At the end of lap 12 Daniil Kvyat slid off at high speed as he went into Becketts. The AlphaTauri driver’s impact was heavy but after coming to rest on the grass verge at side of the track he was quickly on the radio to tell his team he was OK.

The incident brought out the safety car for a second time and that provoked a rush of midfield pit stops, with all taking on hard tyres. On the following lap the leaders, Hamilton, Bottas and Verstappen included, made their stops and they also opted for the white-banded tyres.

An exception was Haas’ Romain Grosjean who stayed out on track on his starting medium tyres and the Frenchman jumped to fifth in the order behind Hamilton, Bottas, Max and Leclerc.

The action resumed at the end of lap 18 and almost immediately after the re-start Albin was handed a five-second penalty. He pitted on lap 31 and after serving the penalty bolted on a new set of medium tyres for remainder of the race.

Further ahead, on lap 33, Hamilton now led Bottas by 1.4 seconds, with Veratappen a lonely third, eight seconds adrift of the Finn and 15.6s ahead of fourth-placed Charles Leclerc. Sainz and Norris were now fifth and sixth respectively, while Grosjean was clinging on to seventh ahead of Ricciardo, while Stroll was ninth ahead of Ocon. Grosjean was struggling with his tyres though and after being passed by Ricciardo and Stroll, he pitted for hard tyres and dropped back.

The race then settled and with the bulk of the field locked into a one-stop race it looked as though the order at the front would remain static until the flag.

However, in the final five lap Bottas began to slow and while those around him were lapping in the 1m29s bracket the Finn quickly drifted out 1m31s. And suddenly, two laps from the flag, his front left tyre deflated and sent him off track. He recovered but not before Verstappen had powered past to take P2.

With a significant margin ahead to Hamilton and with a huge advantage over Leclerc, Red Bull opted to pit Verstappen for a new set of soft tyres for a fastest lap attempt. Within moments of the Dutch driver rejoining, however, pursuit of fastest lap became pursuit of victory when Hamilton too suffered a front left deflation. The Briton was halfway round the track when the failure occurred and the Red Bull driver immediately began to hunt down the Mercedes man.

However, despite almost going off track in the final corners, Hamilton was able to hold it together and he managed to cross the line in the lead, though he only had 5.8s in hand over Verstappen.

Leclerc followed to take third place with Ricciardo fourth ahead of Norris and Ocon. Gasly earned good points for AlphaTauri with seventh place.

The Frenchman did well to hold the position as just 1.4s behind him at the flag was Albon. The Thai driver had charged through from the back of the field in the closing stages and thanks to the tyres failures for Bottas and Carlos Sainz he claimed eighth place ahead of Racing Point’s Lance Stroll and 10th-placed Sebastian Vettel.