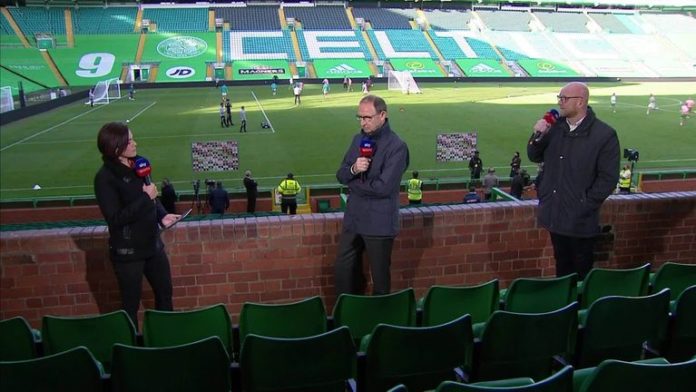 John Hartson has called on Leigh Griffiths to prove his fitness to Celtic manager Neil Lennon after the striker missed his side’s 5-1 win over Hamilton on the opening weekend of the Scottish Premiership season.

Odsonne Edouard grabbed a hat-trick as Celtic began the quest for an unprecedented 10th successive Premiership title with a comprehensive victory over the relegation favourites at Parkhead.

Last month, Griffiths was forced to train on his own at Lennoxtown to improve his fitness rather than join the squad for pre-season friendlies in France, and he was not part of Lennon’s matchday squad on Sunday.

Hartson believes Celtic do not need to be in the market for another centre forward, provided Griffiths can prove he is ready to commit to the side.

The former striker told Sky Sports: “From an attacking point of view, they’ve got Edouard, Patryk Klimala and Karamoko Dembele.

“But there’s a lad sitting at home who needs to get his act together in terms of proving to his manager that he is right physically and mentally to get back into the group and onto the pitch, and he should be out there.

“For whatever reason, his manager doesn’t think he’s ready. I hope he’s listening and I hope he’s gets his act together. Celtic won’t need another centre forward if he does.”

The ninth flag was unfurled in the absence of supporters due to the coronavirus restrictions and inside an unusually quiet Celtic Park, the hosts lay down a marker with a five-star performance.

Accies midfielder Scott Martin reduced the deficit with a deflected strike, and Hartson believes Lennon should look into provided more defensive cover before the window closes in early October.

“I know they have the youngster Stephen Welsh and Nir Bitton can play in there as well but I’d like to see them get cover for Kristoffer Ajer or Christopher Jullien at the back as Jozo Simunovic has moved on.

“Celtic always need to be in the market for quality players, especially if they become available.”

Rangers will have to come up with something special to wrest the title back from their Old Firm rivals, particularly if Celtic can hang on to Edouard – who again looked a class apart.

Mohamed Elyounoussi has been signed on for another season on loan from Southampton, joining goalkeeper Vasilis Barkas in joining Celtic so far this summer.

Former Celtic manager Martin O’Neill told Sky Sports: “You have to know what your budget is for a start, so of course you’ve always got to be on the look-out and I think Celtic are.

“It’s what’s afforable and it’s a case of whether those players would make an improvement to the current team. Sometimes, that’s very difficult and how do you improve on Edouard?

“But you need someone in case anything happens to him. You need to find someone you can depend on, and sometimes that’s difficult to find.”

The 2020/21 Scottish Premiership campaign will be a season like no other, according to the new Sky Sports Scottish Football podcast.

Ahead of the new season, which will be broadcast exclusively live on Sky Sports, Andy Walker and Kris Boyd joined Ian Crocker for a special preview on our new podcast.

Sky Sports – the new home of Scottish football – has announced its plans ahead of the Scottish Premiership season, which returns this weekend, with Eilidh Barbour presenting coverage of up to 48 live matches.

All you need to know…