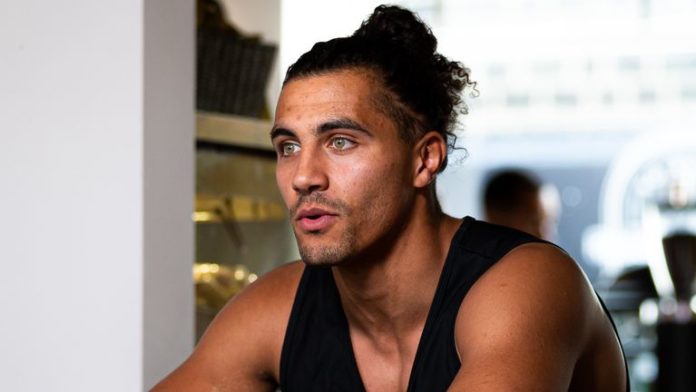 Huddersfield Giants players Michael Lawrence, Ashton Golding and Jordan Turner opened up to Sky Sports about their experiences of racism, and how the Black Lives Matter movement can have a lasting impact

Huddersfield Giants back row Michael Lawrence says he knew when he was a boy that he faced an uphill battle to get international recognition as a black rugby league player.

Huddersfield academy graduate Lawrence, and team-mates Ashton Golding and Jordan Turner, opened up to Sky Sports in a short film about their experiences of racism and the barriers they have overcome in their bids to forge a career in the sport.

Lawrence played for England’s feeder team, England Knights, before eventually becoming a full international with Jamaica in 2019 after more than a decade as a Huddersfield player.

“I’ve been picked and played for Yorkshire when they used to have camps and I was selected for a national camp,” Lawrence told Sky Sports as he reflected on his early experiences in the sport.

“My coach at the time was black. I was still very young and I was the only black guy out of 40 players that got selected for the national camp, trying to make the England team.

“He (my coach) must have experienced it whilst he was playing himself – he was an ex-professional.

“That’s what he told me when I was 14 years old. He was like, ‘they don’t want you there and you’re going to have to be 10 times better than anyone else that’s on that field to get in that side’.

“That’s something that has stuck with me.”

Lawrence’s team-mate Jordan Turner, who also has Jamaican roots, told Sky Sports, he regularly felt like he was being stereotyped as an aspiring young rugby player.

“I always got labelled that I was lazy, and I was lethargic on the pitch when I was a kid,” Oldham-born Turner said.

“I don’t ever feel like that was the case. I always tried really, really hard but within sport, in rugby league – and I know it has happened in football because it has come out in the press – there is a stigma against young black kids or mixed race kids [in terms of] how they carry themselves.

“I had that stigma attached to me. But when people sat down with me and found out what I was about they knew that was completely wrong.”

‘You’re not bad for a black lad’

Lawrence said he sometimes wonders what life would have been like for him as a young black man growing up in Huddersfield had he not made it as a rugby league player for his hometown club.

“I know a lot of the time, if I wasn’t in the position that I am in as a Super League player I would be treated a lot differently around the town by a lot of people,” Lawrence said.

“The number of times I’ve heard ‘you’re not bad for a black lad’ is unbelievable. People don’t think that’s racist, but to me, I find that offensive. That’s stuff I can’t accept anymore.”

Golding: Rugby league ‘probably does have an issue’

Lawrence’s club and international colleague Golding, who joined Huddersfield from Leeds Rhinos late last year, said he does not believe alleged racist incidents in the sport are investigated with enough vigour.

He said: “We’ve been in games before where there has been racial abuse and the game has been stopped and it’s been brought to the referee’s attention.

“Nothing come of it. It’s a system that does not practice what it is preaching. It is kind of flawed. It is a flawed system, so that’s where I say, yeah, rugby league probably does have an issue.”

“It’s a thought-provoking piece, and we thank Sky and the three players – Ashton, Michael and Jordan – for it,” the RFL said.

“All our responses in recent weeks and months have attempted to strike a balance – to reaffirm Rugby League’s desire to play its part in this conversation, and our abhorrence of racism or prejudice in any form – while acknowledging that as a sport we have work to do, and that actions must speak louder than words.

“We shared a refreshed vision this week, and committed to publicising actions and targets on October 1. The game as a whole – including Super League, Rugby League Cares and Rugby League World Cup 2021 – are committed to this.

“In response to Ashton Golding’s specific reference, we would strongly refute any suggestion that we do not treat allegations of racial abuse in the game seriously.

“In the case to which we think he is referring, following a community game fixture last year, an investigator was appointed, but there were inconsistencies in the evidence provided, and it was impossible to prove the language used.”

Huddersfield Giants are yet to accept an invitation to comment on the film.