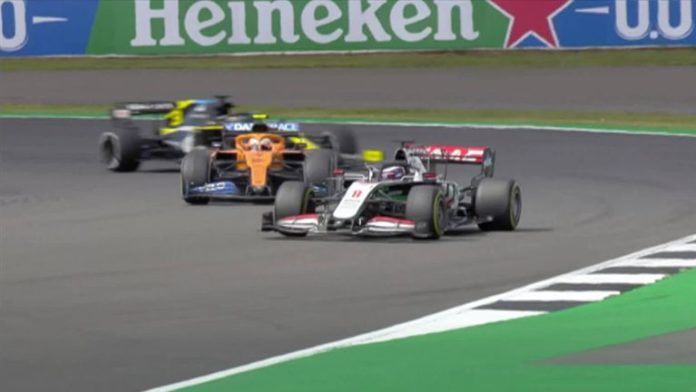 Grosjean handed warning by stewards; Sainz: “I think he’ll have a look and regret it because it’s clearly dangerous and unacceptable.”

Carlos Sainz condemned Romain Grosjean’s driving as “very dangerous” and “unacceptable” during the British GP – although the Frenchman was only handed a formal warning by race stewards.

After weaving while under attack from Sainz, Grosjean was handed a black-and-white-flag – a final warning – by stewards during the race and he was then summoned to see them afterwards for a similar move on Daniel Ricciardo.

But Grosjean avoided a penalty and was instead given a formal warning after he and Ricciardo agreed that their situation was “manageable” for the Renault driver.

“As long as he’s aware that it was close to being a bit on the edge,” Ricciardo told Sky Sports F1.

Sainz, however, was far more damning of the Haas driver’s defensive moves.

“It was a race of two halves,” Sainz, who was running well before a late puncture, said.

“A lot of attack in the first few laps, during the Safety Car period, and having to go through a very dangerous Romain Grosjean.”

The Spaniard, who was unfortunate to finish outside the points, added: “I think it’s unacceptable. You can clearly see how he was waiting for me to get close to go side by side to give me a shock.

“We’re doing 300kp/h, we need to respect each other a bit more because you’ve seen a couple of accidents today [Kevin Magnussen, Daniil Kvyat] that are huge.

“I think the drivers… we don’t realise the speed we’re going and when I nearly crashed into Romain because he moved too late. I think he’ll have a look at it and regret it because it’s clearly dangerous and unacceptable.”

The formal warning for Grosjean does not include any driver penalty points.

How the stewards ruled Grosjean incidents

“The stewards reviewed this case with Grosjean and Ricciardo. They also reviewed the video of the incident between them. Grosjean explained that in both cases his moves were before the braking zone, although in the second case it was closer.

“When it was put to the drivers that these were late moves in relation to the approaching car, or “Movement in Reaction” and also potentially dangerous, they agreed on this as a general principle.

“Ricciardo agreed that this situation, while close, was manageable by him as the following driver.

“The Stewards issued a Warning, with the admonition that late movement in reaction to drivers following is also considered potentially dangerous and will be scrutinised by the Stewards.”