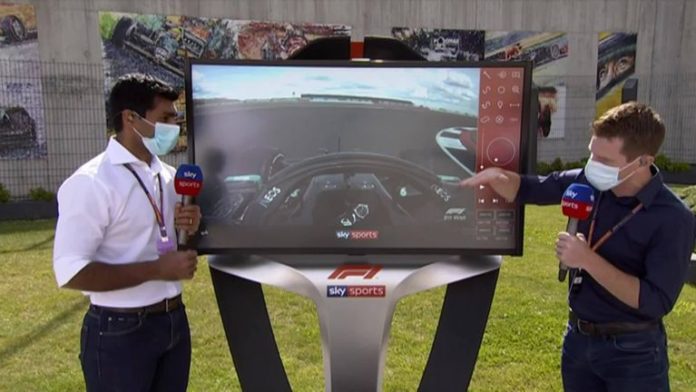 “It kicked off with two or three laps to go – and it was just mayhem out there. I’ve never seen anything like that at the end of a grand prix for a winner.”

The verdict of 2009 world champion and Sky F1 pundit Jenson Button after an extraordinary climax to a British GP at Silverstone that saw Lewis Hamilton effectively take the win on three wheels and two other drivers – including the other Mercedes of Valtteri Bottas – drop out of the top four when their own tyres punctured.

So how did it all unfold and what exactly was going on?

The story of the race before the dramatic end

Had the 2020 British Grand Prix run three laps shorter, then while it wouldn’t have been fair to say that the showpiece afternoon had been completely devoid of incident – try telling that to Kevin Magnussen and Daniil Kvyat – it wouldn’t have been a race that took prominence in Silverstone’s illustrious annals.

Hamilton had led every lap from pole position from Valtteri Bottas and, although the Mercedes team-mates were rarely more than two seconds apart until the closing stages, they were out of reach for Red Bull’s Max Verstappen and a world away from the rest.

Yet the appearance of a second Safety Car inside the race’s opening 13 laps had at least thrown a strategic curveball into proceedings by bringing forward the leading group’s first pit stops.

Wanting to avoid a second trip back to the pit-lane later on, Hamilton, Bottas, Verstappen and Co. all switched to Pirelli’s hardest – and most durable – tyres for what they planned to be a long 39-lap stint to the finish.

This strategy did have a catch, though.

It meant tyre management would inevitably play a role in the race’s final section – with Silverstone one of F1’s most demanding circuits. Even the dominant Mercs would have to be mindful of that.

First up: What happened to Bottas?

It was the second Mercedes on the road which was the first to hit trouble.

Having reported vibrations from his front tyres several laps beforehand, Bottas had slipped 7s behind Hamilton entering the race’s final four laps and was actually being caught by Verstappen – although the Red Bull driver had tyre concerns of his own and was still seven seconds adrift of the second Mercedes.

But then Bottas’ race unravelled as spectacularly and suddenly as his car’s front-left tyre.

SkyPad analysis with Karun Chandhok and Anthony Davidson in the video at the top of the page shows the Mercedes’ tyre started to deflate as it completed the final section of corners at the end of lap 49.

“The problem for Valtteri was that he was just passing the pits,” explains Karun. “So he had a full 5.98km to do [to get back].

“As he got up to the first corner the tyre started to completely go on him, as soon as you put a bit of load on it. He backed out of it and it had fully deformed by the first big right-hander.”

Running wide and overtaken by Verstappen at Turn Three as he grappled with his W11, Bottas was forced to limp back to the pits while trying to keep the tyre carcass on the wheel’s rim.

“I was trying to put the pressure on Lewis, but we knew it was going to be a long stint on the hard tyre,” said a disappointed Finn afterwards. “Towards the end I was starting to get more and more vibrations on the front left.

“I didn’t see any debris or anything, so I reported the vibrations and started to manage the tyres, but then the tyre failed suddenly on the start/finish straight and I had to complete a full lap back to the pits which cost me a lot of time.”

It dropped Bottas out of the points and there was insufficient time to recover. He finished 11th.

The McLaren driver had run a strong race in the top five and should have been one of the chief beneficiaries of Bottas’ demise.

But fourth place turned into a point-less 13th for Sainz when his own front-left tyre failed on the penultimate lap.

“Everything was working well, we were on for a very strong P4 and 12 points, but then the tyre failed and I had to box on the last lap,” rued the Spaniard.

“Very disappointing, frustrating and unfortunate. Nothing we could do about it though.”

What happened to Hamilton and how did he still win?

It was the six corners into the race’s 52nd and final lap when the dominant race leader suffered the same crippling fate.

Speaking to Sky Sports F1 afterwards, Hamilton said he was fortunate that the tyre hadn’t gone in the middle of one of Silverstone’s many flat-out sections.

“I’m really so grateful it didn’t happen through a high-speed corner,” said Hamilton. “Imagine it was through Copse or something like that? It would have been a disaster.

“But it happened there and for the moment I just told the team ‘deflation’. Then I nearly didn’t make it through the next two corners – particularly Turn Seven – and, rather than panicking, I was ‘okay, how do I get this thing home?’

“I only have half a lap or whatever it is to get back. How can to get back? Am I going to lose this race? All these questions starting going and you’re like ‘no, keep going, keep up the power and keep up the speed’.

“As I tried to accelerate, the tyre starts to deflate more and I think I’m going to lose the wing and maybe the wing will go under the car. You have all the different scenarios that face you – and the thing doesn’t want to turn right obviously because of the busted tyre!”

But Hamilton still displayed his in-car wherewithal even as he wrestled with the W11 and was being informed about the progress of Max Verstappen’s fast-closing Red Bull behind him.

“This highlights how cool he is,” said Davidson. “You’re leading your home Grand Prix, your tyre has just let go, you’ve got Max hunting you down, and he turns around Copse and mid-way through the corner he makes a steering wheel adjustment!”

Chandhok added: “It’s awareness for him. He knows if he does certain things to the diff and certain changes, he can just help to safeguard the car even more. That’s experience and a guy driving so far within himself with spare brain capacity.”

Button was also impressed by his former team-mate’s composure.

“I’m amazed you can actually drive that quick on a damaged tyre,” said the 2009 champion.

“It looked like it was going to just disintegrate and take the front wing with it. Lucky the tyre belt stayed on the rest of the tyre.”

Hamilton crossed the line just 5.9 seconds clear of Verstappen – having started the final lap more than half a minute ahead after the Red Bull had stopped for fresh tyres in the wake of Bottas’ problems.

It would almost-certainly have been very different had the Dutchman not pitted, but Red Bull insisted there were “no guarantees” that Verstappen wouldn’t have suffered the same fate as the Mercs had he kept on going with his own worn fronts.

So what caused the tyre problems?

That’s still to be determined.

What we do know is that Silverstone is one of the fastest and most aerodynamically loaded circuits in F1, with the left tyre taking particular strain owing to the number of quick right-handers.

“This is one of the toughest circuits,” explained Button. “It has lots of high-speed corners – we’ve all been saying how amazing this place is with the fast flow of the pace and changes of direction. But this still shouldn’t happen. It wasn’t just one car. The teams aren’t going to be happy with this.”

Pirelli say they will investigate all three incidents and hope to find an answer in the forthcoming days.

“We’ll of course be investigating exactly what happened to the tyres on the two Mercedes cars as well as that on the McLaren of Carlos Sainz in the final two laps of the race,” said the tyre supplier’s boss Mario Isola.

“What we already know for sure is that the tyres involved in these failures were extremely well-used, with nearly 40 laps of running; albeit some behind the safety car.”

Mercedes said track debris could not yet be ruled out after several accidents and incidents during the race – including a broken front on Kimi Raikkonen’s Alfa Romeo on lap 47.

“We haven’t got the conclusions yet because there was so much debris on track that it needs to be properly analysed by Pirelli before we really know what the reason is,” said Mercedes’ Toto Wolff.