Home Culture Courteney Cox is returning to the big screen for a fifth ‘Scream’... 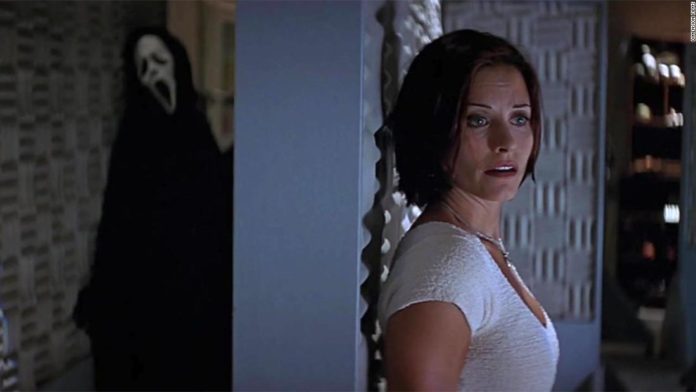 The 56-year-old actress confirmed the news on Instagram by posting a video of the villain’s black and white mask with the words “I can’t wait to see this face again” in red.
A representative for Cox told CNN the actress will be reviving her role as Weathers, the icy, anything-for-airtime TV reporter.
There are currently four “Scream” films, with the first debuting on December 20, 1996. Cox’s ex-husband, David Arquette, will also return to his role as Sheriff Dewey Riley, according to The Hollywood Reporter.
The pair co-starred in all four films and will reunite for the fifth “Scream.”
“I am thrilled to be playing Dewey again and to reunite with my Scream family, old and new,” Arquette said in a statement, The Hollywood Reporter said. “Scream has been such a big part of my life, and for both the fans and myself, I look forward to honoring Wes Craven’s legacy.”
Craven, who died in 2015, directed the “Scream” franchise.
Arquette and Cox met on the set in 1995 and fell in love. The couple married in 1999 and had daughter, Coco, in 2004. They separated in 2010 and divorced in 2013.