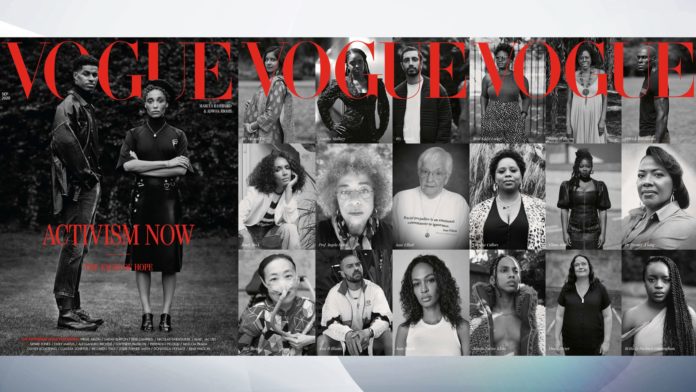 British Vogue editor Edward Enninful is glad he was racially profiled at work because it reminds him never to think of himself as “too successful”.

Speaking to Sky News on the day that Vogue revealed its September issue was produced by a predominantly black team, Mr Enninful says systemic racism is a global problem.

The editor of the fashion bible made headlines across the world when he tweeted about being racially profiled at Vogue House when a security guard told him to use the loading bay when he arrived at work.

Recalling the incident, he said he is glad that it happened because it reminds him never to think that he is too well-known.

He said: “It wasn’t an isolated incident. Of course, it takes you back to all those moments in your life when that sort of thing has happened.

“For me, the beauty of that incident is that it just makes me aware to never think I’m too successful, that it can happen any day. I have to be really alert and deal with it.”

He added: “It’s important that something like this did happen, because it reminds me never to think I am too well-known or too established, because to somebody you are another black person.”

Mr Enninful has also called out those in the fashion industry who have seated him in the second row of a fashion show when his peers were given front row seats as being guilty of racial profiling.

Breaking new ground as an editor has always been Mr Enninful’s forte and never more so than when he invited the Duchess of Sussex to guest edit the Forces For Change edition.

Meghan was heavily criticised for taking on the role. Mr Enninful describes her treatment as unfair and harsh but doesn’t blame it solely on racism.

He said: “The Duchess of Sussex is a brave woman. I feel that part of the problem is, it was more institutional.

“She walked into an institution and everybody expected her to know the rules.

“Sometimes it takes a minute to understand the rules. She did get very unfair treatment. It was harsh but I wouldn’t just blame it on racism.”

The prestigious front cover of the September issue features footballer Marcus Rashford and model Adwoa Aboah, and Vogue is calling it the most important issue of the year.

The cover stars have been joined by 40 activists, including the co-founder of Black Lives Matter, Patrisse Cullors, and prominent member of the Black Panther movement, Professor Angela Davis.

Dr Bernice King, the youngest child of Dr Martin Luther King, also features, along with Doreen Lawrence, whose son Stephen was killed by racists in London, and Patrick Hutchinson, the Black Lives Matter hero who famously saved an injured white man believed to be a far-right demonstrator, at a protest in London.

Rashford was chosen after he led the campaign to secure free school meals for children in England during the summer holidays.

The government reversed its decision to withdraw them after the footballer wrote an open letter detailing his own experiences relying on free meals.

Meanwhile, Aboah graced Mr Enninful’s first Vogue cover when he was made editor-in-chief, and makes a welcome return in this issue as she continues her work as the founder of the online community Gurls Talk, where young women can discuss issues such as race, education, mental health, sexuality and relationships.

Mr Enninful, who marched in the Black Lives Matter protest in Hyde Park, says all black people in England are aware of racism growing up.

British Vogue’s first black editor says he has always pushed for diversity, even before it was articulated as a concept.

“Throughout my career, I didn’t know at the time, but I always championed what is now I guess known as diversity and inclusion.

“I always wanted to include people of all races, all colours. I always call it the marginalised or the other. So for me, my work wasn’t just about fashion but it’s making people feel included.”

He won’t shy away from controversy and will use his platform to address injustices all through the highest quality Vogue lens.

He added: “I will make sure there are more Edward Enninfuls behind me. Recruitment has to change – we need more people behind the scenes.

“It’s not enough having black people on your Instagram feed or in your magazine – we’ve accomplished that.

“The people behind the scenes – that’s where change really happens.”