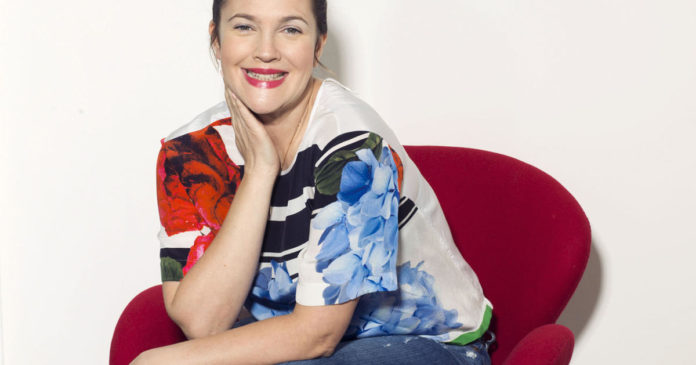 Drew Barrymore, an accomplished actress, producer and director, is launching her own beauty brand. Maybe, she says, it’s the next chapter now that she’s married art consultant Will Koppelman and they have a 4-month-old daughter, Olive.

She’s not just starring in the ad campaign or splashing her name on the box. Barrymore says she is growing Flower, which will be sold exclusively at Wal-Mart stores, from the ground up. (Products are being added all month, and Flower will be fully launched by the end of January.)

“I think it could last, and my daughter could work on it someday,” the 37-year-old Barrymore says. “I think I’ve earned the right to do it, after so many years working with Cover Girl, and I’ve been in a makeup chair since I was 6.”

This was hardly a whim. While development and production have moved quickly, taking about 18 months to sign the deals with Wal-Mart Stores Inc. and manufacturer Maesa to launch with 181 products, it’s been on her mind all day, every day.

On the day of this interview, she had posted a Facebook update tallying up the hundreds of meetings, the thousands of miles flown – including to Wal-Mart headquarters in Arkansas – and what feels like millions of questions, requests and comments to the lab.

She’s an eager makeup enthusiast – “I don’t think much about clothes, but if you take away my concealer, I wouldn’t know what to do,” she says.

Barrymore spent five years as co-creative director at CoverGirl for beauty behemoth Proctor & Gamble, so she went into the new cosmetics line with big ideas but also realistic expectations, she says.

“I wanted to make a new model with Wal-Mart. I wanted a different business model, I want the money to go into the formula,” she says.

For her own use, there is an unlimited supply of the very best cosmetics and skin-care products for the taking – probably for free – but she says most women don’t find themselves in that enviable position. “Women shouldn’t have to pay a lot to look and feel their best,” she says.

Flower cosmetics, which include lip colors, eye shadows, nail polishes and mascaras, range in price from about $5 to $14.

What Barrymore doesn’t like are feathering lipsticks, uneven foundations — and anything that is too hard to find. Yes, even with her full vanity at home, she’s had to run out to the local drugstore in some remote places because an airline lost her luggage or she forgot to pack something.

If she doesn’t look her best, there will be a photographer around the corner to capture it, she says.

One would think that a signature girlish giggle from Barrymore, the granddaughter of screen legend John Barrymore and star of “E.T.: The Extra-Terrestrial,” the “Charlie’s Angels” movies and the HBO movie “Grey Gardens,” would go a long way.

Watching her in the corporate board rooms at the Tribeca offices of Maesa, Barrymore seems in control of the conversations she’s having with executives, publicists and reporters while putting everyone at ease.

She’s wearing a colorful shirt and dark jeans, and her hair is wrapped in a tight bun. She pops in and out of a chair during a photo shoot to greet colleagues. Maybe she makes her handlers a tiny bit frustrated because she carefully considers the colors and products she wants to highlight as her “picks.” (I Lavendare You nail polish, About Face foundation and Intense Black mascara eventually emerge as the “must-haves” of the day.)

Wal-Mart was already planning to make over its beauty department, says Carmen Bauza, vice president of beauty and personal care for Wal-Mart U.S.

“We wanted something special. We were not interested in a trend, a celebrity brand that wouldn’t last,” she said. “We want this to be here and be here for a long time.”

Flower Films is the name of Barrymore’s production company, and it seemed a natural for a beauty brand. It’s pretty, uplifting and happy — and it could be the most ornate rose or the simplest daisy, just like the woman wearing it.

Barrymore says she was surprised the name wasn’t taken, but her father-in-law, Arie Koppelman, the former Chanel CEO, couldn’t believe it. “He kept saying, ‘How could it not be taken?’ And it is pretty insane that there’s at least not a perfume with that name!”

Maybe there will be soon.