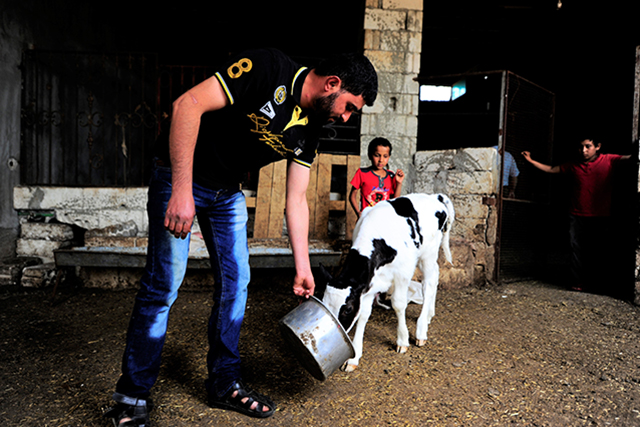 Without an intervention, more animals, which are a source of food and livelihood, will be lost, resulting in increasing rates of food insecurity.

After nine years of devastating crisis in the Syrian Arab Republic, vulnerable farmers and herders in rural areas still face several difficulties producing food. Complications persist to access inputs, services and facilities, all of which have limited farming families’ ability to secure sustainable sources of food and livelihoods. According to United Nations estimates, 7.9 million people in the Syrian Arab Republic in 2020 are food insecure and an additional 1.9 million people are at risk of food insecurity. Roughly 50 percent of the people in need reside in rural areas.

The crisis has caused the loss of 30 to 40 percent of livestock animals in the Syrian Arab Republic, and this situation has been worsened by restriction measures implemented to prevent the spread of coronavirus disease 2019. Combined with an unexpected increase in the exchange rate, the agriculture sector has become the most affected sector by the pandemic. The precautionary measures have led to increases in input prices, mainly fodder and veterinary services, and transportation costs as well as to the closure of market outlets (restaurants and animal markets), impeding herders’ capacity to generate an income to sustain their livelihoods and enable them to resume production.

Lumpy skin disease, an infectious disease that affects cattle, is another challenge threating small-scale herders’ livelihoods. The disease causes fever as well as nodules on the animal’s skin, and it can lead to the animal’s death. In the Syrian Arab Republic, the first cases were detected in Lattakia Governorate, after which the disease spread to Hama and Homs governorates. The disease carries a high potential to spread to other governorates if cattle are not vaccinated against it.

The Government of the Kingdom of Belgium contributed USD 450 000 to FAO, through the Special Fund for Emergency and Rehabilitation Activities (SFERA), to improve the food security and nutrition of 17 200 vulnerable cattle breeders affected by the crisis and the outbreak of lumpy skin disease.

Thanks to Belgium’s support, FAO plans to conduct a large-scale vaccination campaign against the disease, providing 500 000 vaccine doses. Moreover, FAO will support 600 small-scale herders in Lattakia Governorate with 300 tonnes of animal feed to enable herders to enhance their livelihood and produce quality animal products.