Home Culture ‘The Swamp’ wades into what’s wrong with Congress but doesn’t find a... 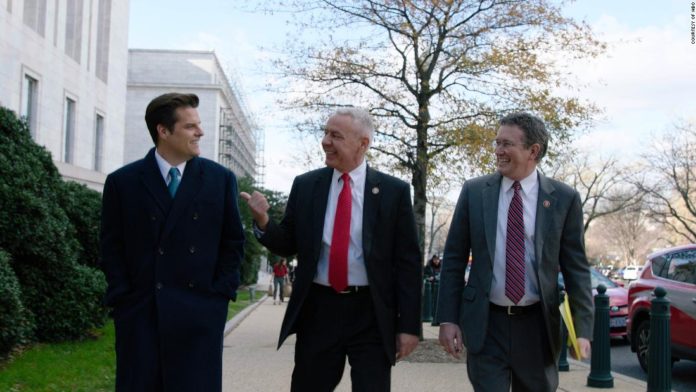 Directors Daniel DiMauro and Morgan Pehme, part of the team behind “Get Me Roger Stone,” spend considerable time trailing Gaetz and fellow GOP representatives Thomas Massie (Kentucky) and Ken Buck (Colorado), ostensibly seeking to present the more dysfunctional aspects of Washington, including toxic partisanship and the corrosive emphasis on fundraising.
Much of the focus, however, tilts toward Gaetz, who speaks openly about cultivating media and trying to create viral sound bites, making these two hours of exposure on a national TV platform a sort-of meta commentary on the efficacy of that as a public-relations strategy.
Gaetz has been a staunch defender of President Trump, whose muffled voice can be heard when the two chat on the phone. The congressman orchestrated the chaotic scene last October when Republicans disrupted closed-door proceedings during the impeachment inquiry process.
Still, “The Swamp” allows Gaetz, Massie and Buck to cast themselves as political mavericks, highlighting Gaetz’s bipartisan work with California Democrat Ro Khanna on a resolution opposing war with Iran, or grabbing coffee with former congresswoman Katie Hill.
The more illuminating aspect of “The Swamp” comes from a conversation with Harvard law professor Lawrence Lessig, who speaks about the destructive influence of former House Speaker Newt Gingrich. Not only did Gingrich stoke the partisan fires, Lessig argues, but he understood “the way you raise money is to trigger the hatred of the other side in your favor.”
“The Swamp” does yield some amusing unscripted moments, such as Massie bumping into a colleague he was just (not very flatteringly) discussing, or Gaetz meeting with a constituent who complains about people not singing the Star-Spangled Banner, then botches the words when he invites her to do so.
Still, even with its behind-the-scenes glimpse of life in Congress during a tumultuous period that included the run-up to impeachment, the film feels as if it’s frittering around the edges, perhaps in part because its subjects seldom appear to forget the cameras and let their guards down.
“Drain the swamp,” of course, became a favorite campaign rallying cry of the president, and it’s presented here with a tinge of irony. Among those weighing in is John Sarbanes (D-Md.), whose advocacy for genuine reform has not surprisingly met considerable resistance — proof, Lessig contends, that paralysis benefits the status quo.
For political junkies, “The Swamp” has its merits simply as a peek behind the curtain at those pulling the levers of power. When it’s all over, though, the film proves less about dredging the swamp than the filmmakers gaining the opportunity to provide a close-up view of what it’s like to muck around in it, a process that offers less clarity or insight than advertised.
“The Swamp” premieres Aug. 4 at 9 p.m. on HBO. Like CNN, HBO is a unit of WarnerMedia.