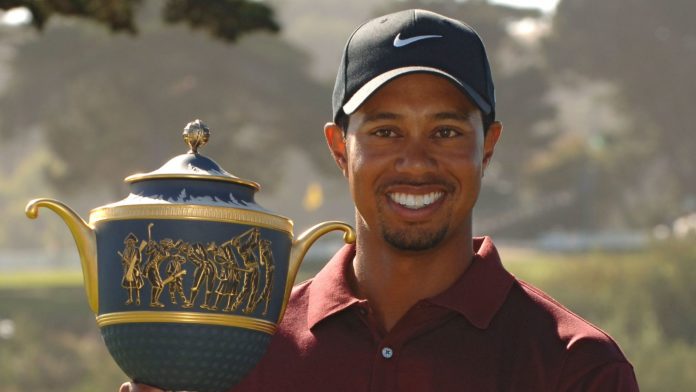 TPC Harding Park will host a major for the first time this week when the PGA Championship is held at the San Francisco venue.

The Harding Park course was substantially renovated in 2002/3 to make it better suited for PGA Tour events and it has already staged a number of high-profile tournaments since then.

We look back at some of the events staged there…

The first PGA Tour event held at the course since 1969 produced a thrilling finale as Tiger Woods edged out John Daly at the second hole of a play-off.

Colin Montgomerie led at the halfway stage but he was overtaken by Daly after three rounds, with Woods then joining his fellow American at the top of the leaderboard on 10 under after a three-under 67 in the final round.

Montgomerie, who missed some crucial birdie putts in the final round, had to settle for a share of third place on eight under with fellow Europeans Sergio Garcia and Henrik Stenson, while David Howell and Graeme McDowell were among those in a tie for sixth on five under.

In an atmosphere described as resembling that of a rock concert, Woods and Daly both parred the first play-off hole, but Daly then missed from three feet to bogey the next and hand Woods his 10th WGC title.

“That’s not how you’re supposed to win a golf tournament,” Woods said. “We’re in a play-off, we’re battling, and JD played beautifully all week. It shouldn’t end like that.”

The eighth Presidents Cup saw the United States ease to a 19.5-14.5 win over the International Team at Harding Park.

Woods once again demonstrated his liking for the course as he won all five of his matches to lead Fred Couples’ team to victory over Greg Norman’s side.

Steve Stricker partnered Woods to his wins in the fourballs and foursomes, although he lost to Geoff Ogilvy in the singles as Woods demolished YE Yang 6&5, his winning 10-foot birdie putt on the 13th also clinching the outright win and ensuring the hosts retained the trophy.

Phil Mickelson also performed well for the USA and finished unbeaten with four wins and a half, while Vijay Singh led the Internationals’ points haul with 3.5 thanks to two victories and three halves.

TPC Harding Park is scheduled to host the Presidents Cup again in 2025, but that is now likely to be delayed until 2026 after the 2021 contest at Quail Hollow was pushed back to 2022.

The second World Golf Championship event to be held at the course saw 64 players lock horns in the Match Play in late April to early May in 2015.

Once again there was a big-name winner as top-seed Rory McIlroy defeated Gary Woodland 4&2 in the final to claim his second WGC success.

The Northern Irishman won all three of his group matches and eased past Hideki Matsuyama 6&5 in the first round before coming up against a stubborn Paul Casey in the second round.

McIlroy and Casey were still all-square after 21 holes when darkness forced their match to be suspended – McIlroy had to scrap plans to watch the Floyd Mayweather-Manny Pacquiao fight in Las Vegas as a result.

The duo returned to the course on Sunday morning and McIlroy wrapped up the win at the 22nd hole before taking on Jim Furyk in another tough battle in the semi-finals.

McIlroy was one down to Furyk on the 17th tee but a birdie-eagle finish saw him clinch the victory and set up a final showdown with Woodland, who beat Danny Willett 3&2 in the last four.

He then claimed his third victory of the day by taking control against Woodland by winning four successive holes on the front nine and standing firm from there to triumph on the eve of his 26th birthday.