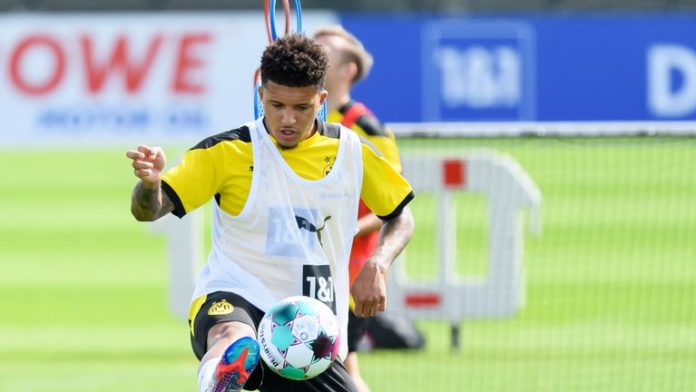 Manchester United are determined not to be bullied into a deal for Borussia Dortmund winger Jadon Sancho.

United see the German club’s €120m (£108m) valuation for the player under the current coronavirus conditions as “unrealistic” for a player who Dortmund themselves signed for £7.2m three years ago.

United are also unwilling to break their wage structure for the 20-year-old following the unsuccessful transfer of Alexis Sanchez.

A fee between United and Dortmund and personal terms with the player are all yet to be agreed.

Sancho remains United’s number one target this summer, but the club have alternate targets in that position if a deal for the England international fails to materialise.

United have completed big money moves for Harry Maguire and Bruno Fernandes in the last two transfer windows but feel the environment for deals has shifted since the coronavirus pandemic – with fees reflecting the tough financial conditions.

Raphael Honigstein told latest Transfer Talk podcast: “There’s absolutely no doubt he would be a huge improvement on what they have, especially if you think of the traditional importance of width in the United team. Wingers that would get the crowd excited and those who take on players, whip in crosses and score themselves – all these things Sancho will do.

“The stats for a 20-year-old are unbelievable in terms of the goals he’s scored and assisted last season in a pretty talented Dortmund team. The flip-side to this conversation is that Dortmund want to make a very careful calculation which is similar to the one Leverkusen are making for Havertz.

“Manchester United are still saying they are just in talks. It’s a bit murky where both sides will try to get the best possible deal. There’s a lot of poker and double-bluffing going on but it’s now down to United to say ‘here’s the money’.”